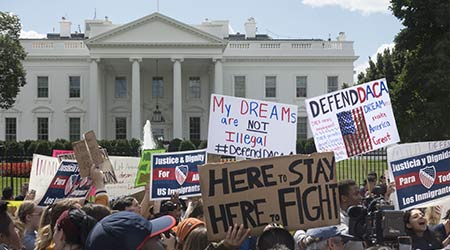 The Supreme Court's recent ruling that the Trump administration cannot revoke Deferred Action for Childhood Arrivals (DACA) makes life easier for American businesses who currently rely on the employment of these individuals, but they're not in the clear just yet, experts say.

Lead by Chief Justice John Roberts Jr., the Supreme Court's June 18 ruling states that the Trump Administration failed to comply with procedural requirements that it provide reasoning for its decision to end DACA. However, the ruling didn't side with or against the policy of DACA, meaning the administration could still go after DACA with another plan.

Nandini P. Nair, a partner at the firm Greenspoon Marder, tells HR Dive that while businesses employing DACA members don't have to worry about those workers right now, they still need to  be prepared for the possibility that DACA could get demolished in the future.

As HR Drive reports, Department of Homeland Security Acting Deputy Secretary Ken Cuccinelli said after the court’s decision that DACA is unlawful and that is enough reason to end the program.

Cuccinelli’s beliefs and the court’s statement that its recent ruling doesn’t solve the DACA debate doesn’t mean that future efforts by the Trump Administration will be successful. Richard Burke, who runs immigration services provider, Envoy Global, says that courts in the United States are suspicious  of the administration’s motives for knocking down DACA due to its past stance on immigration, reports HR Drive.

One thing is for certain: building services contractors and facility cleaning managers will still have their DACA-recipient staff around for the near future