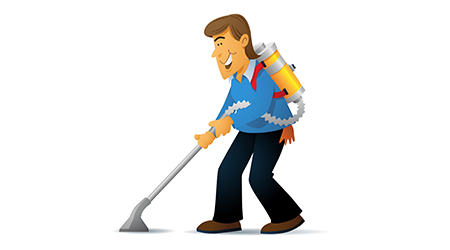 If the reputation kids have for being brutally honest holds true, then one middle school custodian’s carpet drawings are a true work of art.

Shane Maxey reported for one of his shifts at La Pine Middle School in Oregon one day and decided he was going to have a little fun. He used a backpack vacuum to doodle a smiley face. A few days later, Maxey saw one student’s cartoon drawing and decided to carpet draw the more detailed character himself. What resulted was a ritual of suction-induced doodles that have tickled students and teachers to this day.

Maxey’s unique artwork was recently profiled in a report by The Bulletin. He took the reporter assigned to the story around during one of his shifts and drew a large scale picture of “Peanuts” character Linus. Despite only taking a few minutes to complete, the results of the vacuum sketch were quite clear and detailed. That’s because of practice.

“I tried drawing Charlie Brown on a sled the other day,” Maxey told The Bulletin. “It just looked like a bunch of lines. It looked terrible.”

Maybe he was being his own toughest critic. After all, students are said to have rushed into classrooms in the morning to see what art Maxey left them from the night before.

Despite his obvious carpet sketching talents, Maxey says he’s a terrible drawer when using a pencil and piece of paper. Perhaps he's just that good with a vacuum.