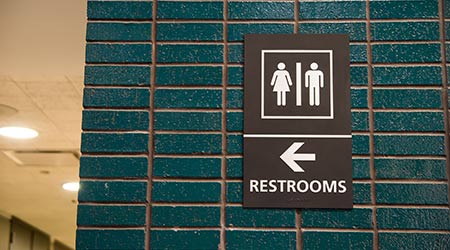 The coronavirus is a threat in virtually every public setting, so it’s no surprise that public restrooms concern many as a place where the virus could easily spread. In an effort to to control the spread, many public restroom in many cities have been shutdown for the time being. But in cities like Seattle, the current lack of public restroom availability is causing major discomfort for those who are forced to be out and about, reports The Pew Charitable Trusts’ Stateline.

Standing outside of a library, Courier Brent Williams tells the publication he’s hard pressed to find anywhere in Seattle where he can use the restroom. The library he speaks in front of is one of only five in the entire city that’s opened its doors, leaving fewer options for people to relieve themselves. Other parts of the Pacific Northwest’s largest city have no options at all.

Williams says he understands why people are rushing into alleyways to relieve themselves in the city’s downtown area. After all, where else are delivery, taxi and Uber drivers to go when they don’t have an actual office?

Finding access to safe, clean public restrooms has been a struggle for a while for homeless people in many cities across America. But with many of those restrooms that were even available now closed, the offering can be brutal. For example, Stateline reports a pet supply store in Seattle used to let homeless people use its restrooms, but is no longer welcoming these individuals due to COVID-19 concerns.

The city of Seattle has implemented 32 portable toilets since the beginning of the pandemic and there are now 114 of these toilets through the city, in addition to 107 restrooms available at parks. However, Alison Eisinger, executive director of the Seattle/King County Coalition on Homelessness, says the city still has thousands of less restrooms available to the homeless than it did before. Until the demand for handwashing and restroom facilities are met, the city will continue to have an issue.

For those who must use a public restroom, there are several precautions they should take to be as safe as possible. One expert tells CNN Health that people should put on disposable gloves or even a plastic bag when they enter a public restroom and take them off upon leaving. If that’s not an option, it’s suggested that people wash their hands with soap and hot water for at least 20 seconds, then dry with paper towels before leaving. Faucets and door handles should be avoided after hands are washed and should only be touched with a paper towel.