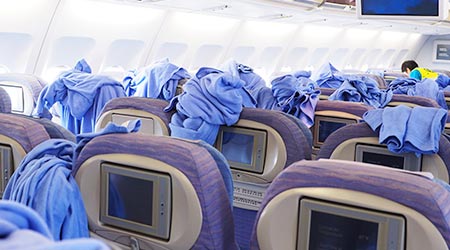 Contracted workers, including airplane cleaners, at Miami International Airport say they are dealing with long shifts without water breaks, poorly maintained equipment, wage theft and a climate of fear. According to reports from WJCT Public Media, despite threats from supervisors, workers are speaking up in hopes for change.

To speak their minds, workers gathered for a discussion with two U.S. representatives and the county commissioner. Staff at the meeting blamed their employer, airport contractor Eulen America, for fostering an unsafe environment and failing to address grievances.

For example, employees who clean airplane cabins said transport vehicles that carry cleaning supplies are infested with roaches. They are given only five minutes to clean domestic flights, and when they encounter vomit or blood on planes, supervisors tell them to use a rag to wipe it off, say reports.

Eulen has approximately 2,000 workers at Miami International. The company, which is based in Miami, is required to pay workers between $14 and $16 per hour under Miami-Dade’s living wage ordinance, the article said.

Employees said Eulen limits their hours to deny sick leave or vacation time. Supervisors threaten to fire them or dock their pay if they complain, the workers said.

In response to the complaints, American Airlines, which operates one of its hubs in Miami, said it “does not condone the behavior the Eulen employees are claiming.” Meanwhile, if Eulen doesn't immediately improve working conditions, the U.S. representatives — one of which chairs the Health, Employment, Labor and Pensions Subcommittee — have threatened to call them before Congress.