Cleaning Up At Super Bowl LIII 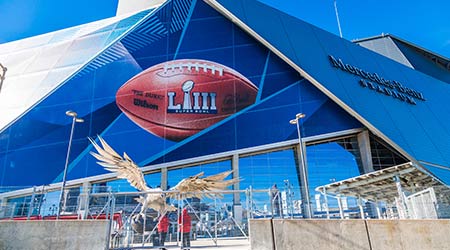 Superstar athletes and mega music icons will command America’s attention Sunday night when the National Football League’s Super Bowl LIII kicks off in Atlanta. Lost on most of the television viewers and game attendees will be the many people who are already working behind the scenes to make sure “the big game” goes on without a mishap.

One unsung group facing a lot of responsibility is the housekeeping crew from AMB Sports and Entertainment, a subsidiary of AMB Group LLC. They are responsible for the cleanliness and upkeep for the Atlanta Falcons, Atlanta United FC, and Mercedes-Benz Stadium, the home of this year’s super bowl.

Since the NFL is taking on much of the stadium operations in the days leading up to, and following the Super Bowl, the ABM housekeeping staff is technically working under the NFL, but is carrying out its regular operations, says Jackie Poulakos, housekeeping manager for AMB Sports and Entertainment.

On some level, the days leading up to the Super Bowl feel like “business as usual” for the workers tasked with cleaning Mercedes Benz Stadium because they’re part of a massive staff that takes on a big workload at a ludicrously fast pace, every day of the year. Beyoncé and Taylor Swift concerts, the MLS Cup, college football’s national championship — these crews have worked under the brightest of lights. It’s because of this experience, Poulakos says, that AMB Sports and Entertainment will not be forced to hire an outside crew for the Sunday's game.

“This is like opening day in a stadium that’s already established,” says Poulakos.

The biggest adjustment staff has had to make leading up to Super Bowl Sunday is remembering how the NFL has parts of the stadium configured. Many of the rooms and areas within the stadium have been changed to fit the event. For example, the warehouse where all the cleaning supplies and equipment is kept is now a temporary home for national and worldwide media.

“It looks like a beautiful ballroom,” says Poulakos of the area where staff usually parks floor scrubbers and all their other tools.

To stay ahead of these changes, Poulakos is leading her staff through various huddles on a daily basis. These meetings are great because they go over what will happen each day and will break down processes of work.

For example, the confetti that showers over the winning team at the end of the Super Bowl might seem like a lot, but it’s really more of a controlled mess that’s not too difficult to clean up. While she doesn’t know exactly how much of the celebratory decoration will be dropped, Poulakos does know that it will be restricted to just the field and west side of the seating area.

“This will be a mess on the field, make no mistake about it, but the seating area shouldn't be so bad,” she says, adding that the workers have gotten quite good at cleaning up confetti.

With the exception of maybe one day a year, the stadium hosts an event everyday and post event cleanup must be finished before the stadium opens back up at around 9 a.m. the next morning. However, the time after the Super Bowl will actually be different because the NFL will still be operating at the Mercedes Benz Stadium for a few days.

The post-game change will actually make things easier for custodial staff because they’ll have more time to change things around before the next event, but that doesn’t mean they’ll have it easy. Most everything that was transformed for the Super Bowl will have to be restored to the previous state. This could result in a large amount of trash.

It’s the wish of stadium brass that the waste left behind after the Super Bowl will be diverted as close to next zero as possible. And the crew wants to accomplish this feat because it’s how they traditionally operate.

“This isn’t about the Super Bowl for us,” says Poulakos, “This is our culture. This is who we are.”

Though she has been working in the business for many years, this will be the first time Poulakos works at the Super Bowl. It’s because of the rarity of this opportunity that she is reminding her staff to take it all in and enjoy the big event.

“I pulled my entire staff together and told them this is probably the biggest, coolest thing we’ll do,” she says.

As for receiving advice herself, Poulakos is relying on a nifty tool.

“I have a word on the back of my door that I look at before I leave that says, ‘be present.’”