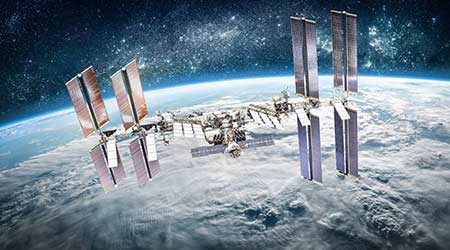 The International Space Station has been estimated to be worth $100 billion. To ensure they remain as healthy as possible, the astronauts aboard the station spend a lot of time on its routine cleaning, according to one who is there right now.

European Space Agency Astronaut Thomas Pequet spoke with journalists recently to explain what exactly goes in to cleaning the International Space Station. According to Space.com, Pequet and other astronauts haven’t been at all worried with contracting COVID-19 while in orbit because they and their equipment had to undergo a strict quarantine before taking flight to the station. Instead, astronauts routinely clean to keep dangerous microorganisms at bay.

Pequet and his fellow flyers disinfect all surfaces that are touched every week. A big cleaning exercise is held every Saturday morning.

Those involved with the space station also hold a variety of tests on antibacterial and antiviral materials that are intended to prevent the growth of microorganisms on the station. Various space agencies are also testing new materials that they hope could not only make it safer to travel through space, but also to live on earth.

For more on the testing that’s going on, read Space.com’s story here.