Cleaning Is Needed In Space 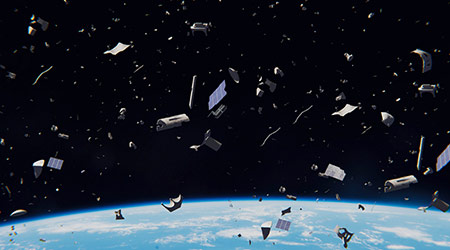 There’s a lot of trash in space, but there’s nobody up there to clean it all up. That’s why many efforts are being put in place to clean space junk up before it causes problems for satellites and astronauts, according to Axios.

Like with Earth, humans are responsible for all the garbage in space. Satellites that broke down now float aimlessly through the dark. Rocket bodies and spacecraft from various missions orbit around the Earth, primed to collide with functioning space equipment also in orbit.

Space should be even more heavily trafficked in the coming years, as the market for in-orbit satellite services is expected to reach $4.5 billion in revenues before the end of the new decade, according to the recent Space Tourism and Travel Markets report by Northern Sky Research.

In an effort to clean up the clutter, the European Space Agency just signed a contract to remove a piece of leftover rocket from orbit as early as 2025. To keep a faltering satellite from completely failing, (creating even more space junk) aerospace and defense company Northrop Grumman launched a space vehicle in October that will attempt to fix up the device. Astroscale, a private Japanese company specializing in the removal of debris from space, plans to launch a test mission this year.

For those who are relegated to cleaning on Earth, here is a piece on properly disposing of infectious waste.