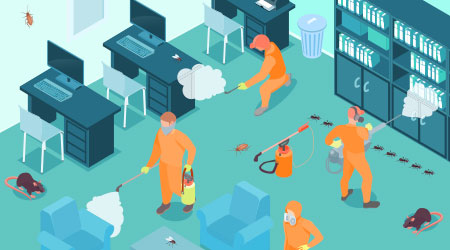 In the latest FluView report ending Feb. 9, the U.S. Centers for Disease Control and Prevention (CDC) revealed that 48 states have seen widespread flu activity. In fact, there are a reported 6,868 confirmed flu-associated hospitalizations from Oct. 1, 2018, through Feb. 9 — an overall flu-associated hospitalization rate of 23.8 per 100,000 population.

It's important to understand the differences between cleaning, disinfecting and sanitizing so staff knows which products to choose for which job. In short:

• Cleaning removes a soil from a substrate. A cleaner will mix with soil allowing it to be removed.
• Sanitizing is to have a substrate deemed hygienic (from a public health perspective), thus sanitizers reduce — don't eliminate — the growth of bacteria.
• Disinfecting kills germs and bacteria.

Custodial workers should be trained to first apply a general-purpose cleaner. After the surface is properly cleaned, workers must then decide whether to sanitize or disinfect.

According to reports, sanitizers reduce microorganisms on a surface to a level considered safe by public health standards. A disinfectant, on the other hand, kills nearly 100 percent of bacteria viruses and fungi on a surface.