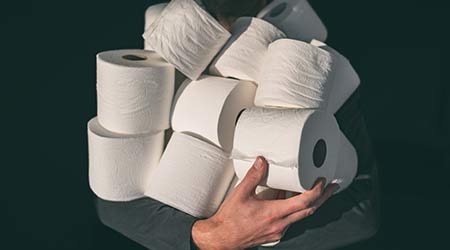 City officials in Dongguan, China, have discontinued the use of facial recognition software intended to limit the amount of toilet paper people use in public restrooms following growing privacy concerns. According to South China Morning Post reports, Dongguan's Urban Management and Law Enforcement Bureau took to its Weibo account to announce that it would be pausing the use of the technology, which was created to limit the same person from using too much toilet paper in a short amount of time.

Weibo is a microblogging website that's popular in China. More than 100 million people had viewed a topic page on the website devoted to discussing the use of the face recognizing-toilet paper dispenser technology. According to the post's report, one person suggested on Weibo that the city simply start charging for toilet paper if overuse is such a big issue. The facial recognition technology, the person seemed to argue, is a bit excessive.

The use of facial recognition technology to govern the amount of toilet paper people use isn't just some weird practice in China that popped up over night. The post reports that the Temple of Heaven Park in Beijing began using such technology in 2017. That trailblazing event was followed by similar implementations in several other Chinese cities.

Leaks of facial recognition data have also been popular in China. There's been instances in which online vendors have sold facial data online for just a few cents per face.