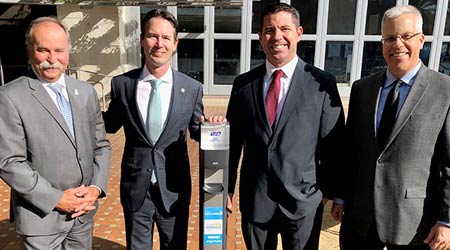 WAXIE Sanitary Supply, the City of San Diego, and their partners have stepped up to nip this year’s flu season in the bud. Along with GOJO, the makers of Purell Hand Sanitizer, WAXIE and the City of San Diego announced the placement of hand sanitizer stations at 57 of the city’s recreation centers and 36 public libraries on October 10th, 2018.

“It is our pleasure to join the Mayor, Councilman Kersey, and our community leaders to support how clean hands save lives. Keeping hands cleaned and sanitized is one of the most important steps a person can take to avoid getting sick and spreading germs to others,” Hazard said.

The move follows last season’s historically deadly flu season during which 342 people died due to flu-related complications, the highest death total since 1988, when the County of San Diego started tracking flu deaths.

San Diego City Councilman Mark Kersey, who lost his brother to the flu in 2014, wrote in an op-ed for the San Diego Union-Tribune that this was an “opportunity to turn tragedy into action.”

In addition to the hand sanitizing stations already placed, the San Diego Chapter of the California Restaurant Association has donated 200 hand sanitizers to be placed at local restaurants. Their goal is to cover 1,000 locations this flu season.

WAXIE Sanitary is proud to have helped spearhead efforts to stop the spread of the flu in San Diego for this season and the years to come.