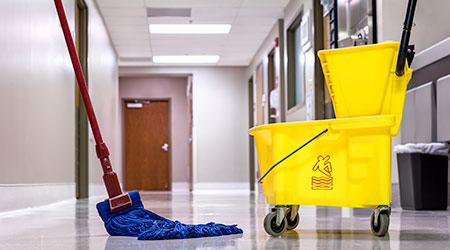 Leslie Fowler, the facilities chief for the Chicago Public Schools (CPS) system, has been ousted following the ongoing scandal over the cleanliness of school buildings. According to reports from Chicago Sun-Times, Fowler was the district's chief of nutrition and facility operations and was responsible for dealing with the dirty conditions that were found in 91 of 125 schools included in recent inspections.

Information on the district website said Fowler oversaw the school systems' food service program, which provides 75 million meals per year for 385,000 students at 685 Schools, as well as facilities maintenance operations for 543 sites.

Fowler was also responsible for overseeing cleaning and other facilities management work done by Aramark. In fact, she actually worked for the company before she becoming employed for CPS in 2012.

Fowler had spent the bulk of her career in food service, but added facilities to her title and responsibilities last August. The new responsibilities came with a $20,000 raise, boosting her salary to $170,000 a year, the article said.

Soon after Fowler was hired by the Chicago district, Aramark was awarded a major food services contract with CPS.

She was credited with bringing back “blitz” cleanliness inspections last December. The surprise inspections were conducted by Aramark along with district employees to check on school cleanliness in the wake of a pest infestation at an elementary school in November.