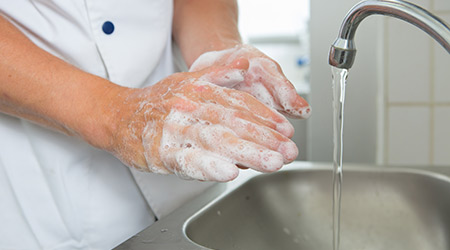 Five hospitals in the Chicagoland area, including The University of Chicago Medical Center, have purchased technology that uses electric sensors to keep tally of how often doctors are washing their hands.

Elmhurst Hospital and Edward Hospital in the Chicago suburb of Naperville will soon require their medical professionals, janitors and transporters to wear a badge around their neck which will track if they have been cleaning their hands before entering a patient’s area.

The technology used by Elmhurst and Edward works by scanning the neck badges every time an employee washes his or her hands with soap or alcohol using a sensor located in the dispenser. The sensors also take note of a worker’s entrance and exit into the room, thus notifying the employer if there is an issue with handwashing compliance.

The decision to track handwashing habits at medical facilities makes a lot of sense. Around 1 in 30 hospital patients acquire an infection while in the hospital or after surgery and more than 70,000 patients die from healthcare acquired infections in the United States each year.

The five Chicagoland hospitals are not the first to institute handwashing compliance programs, and the practice is becoming more common. Last spring, a hospital in Providence, Rhode Island, began using an educational video game to teach proper handwashing techniques to staff.

Two hospitals in Singapore recently developed a hand hygiene program they believe is more successful than most because it focuses on handwashing compliance throughout entire wards instead of examining compliance by each staff member.