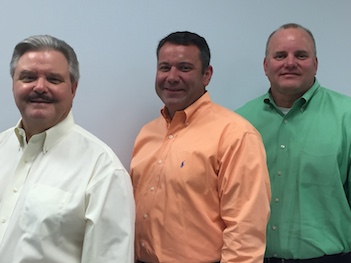 Dade Paper’s Gulf States Branch Manager, Bob Worch, will be retiring in January 2016. Worch has been an extremely valuable member of the Dade Paper organization for the past 16 years.  He joined Dade Paper in 1999 and excelled in the position of Assistant Branch Manager at both the Orlando and Atlanta facilities. Worch also spearheaded Dade Paper’s entrance into the North Carolina market and successfully built sales volume in the area.

In 2004 Dade Paper completed the important acquisition of Paper Products of Mobile and Worch became the Branch Manager of the Gulf States Branch located in Loxley, Alabama. Over the last 11 years Bob Worch he and his team successfully managed seven acquisitions and quadrupled sales in the region.
With the retirement of Bob Worch, Craig Huey has been promoted from Assistant Branch Manager to Gulf States Branch Manager effective September 28, 2015. Craig joined Dade Paper in 2007 upon the acquisition of Auburn Paper, of which he was President for 4 years.  Prior to that time, Craig also owned and operated Miracle Cleaning.

Huey initially held the role of Area Manager for the Auburn/Montgomery territory and was subsequently promoted to Sales Manager. His outstanding leadership skills and industry expertise provided him with the opportunity to take on his next position as Assistant Branch Manager in 2012.
Craig Huey will work closely with Bob Worch in the upcoming quarter ensuring a seamless transition.

John Scott has been promoted from Sales Manager to Gulf States Assistant Branch Manager effective September 28, 2015. Scott joined Dade Paper in 2012 with many years of industry experience.  He successfully managed the sales team in the Auburn/Montgomery Alabama territory.

Dade Paper is pleased to announce these promotions which exemplify the company’s commitment to developing talent and promoting from within the organization.