Challenges Of Cleaning The Statue Of Liberty 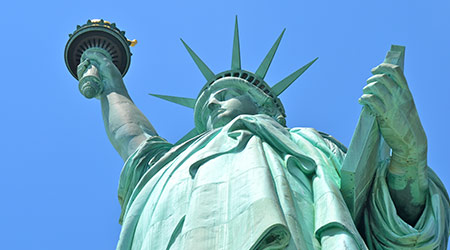 The Statue of Liberty hasn’t had a bath in more than 130 years, according to an article on the AM New York website. And despite regular maintenance and a handful of restoration projects, the symbol of American freedom is plagued by a green hue — a direct result of not being washed.

It's difficult to tell now, but Lady Liberty is actually made of copper and was the color of an old penny when it first opened in 1886. Her look changed over time because as copper oxidizes it develops a green patina. That patina shields the statue from the extreme elements of New York Harbor, like high winds, salt water and air pollution.

Cleaning the green patina from the Statue of Liberty could do more harm than good, according to National Park Service spokesman Jerry Willis in a statement to AM New York. But that doesn't mean there are no maintenance chores.

A team of 24 caregivers from the National Park Service and several contractors maintain the statue and tend to groundskeeping, clear drainage grates, and keep the plumbing, electrical and HVAC systems working.

The popular attraction sees roughly 4.5 million visitors a year who cause constant wear and tear on the doors, elevators and painted surfaces.

The last time major restoration work was undertaken was in 1982 when President Ronald Reagan appointed Lee Iacocca, then chairman of Chrysler Corp., to lead a private-sector effort. During the renovation, the torch was replaced because the supporting structure of the Statue of Liberty’s arm had been damaged over the years as rain fell through the torch’s windows.

The new torch is still made of copper, but it's covered in 24-karet gold leaf, the article said. Visitors to Lady Liberty can view the original torch, which is on display inside the Pedestal lobby.