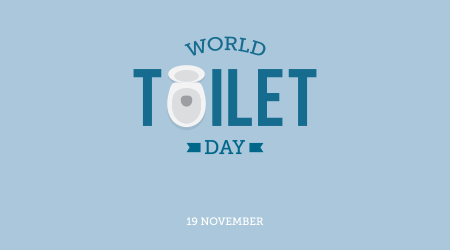 A number of non-profit organizations across the planet are celebrating World Toilet Day, an annual event dedicated to ensuring everyone has a safe toilet to use by 2030.

Held each Nov. 19 since 2013, the event is spearheaded by the United Nations and is part of the intergovernmental organization’s sustainable development goal 6, which focuses on providing sustainable water management and sanitation for all. In addition to improving sanitation, the event also strives for an end to the practice of open-air defecation, which the United Nations deems to be an extreme danger to public health.

“Sanitation is also a question of basic dignity and women safety, who should not risk being victims of rape and abuse because of lack of access to a toilet that offers privacy,” says the United Nations’ website.

While the event aims to ensure safe toilets by 2030, some drastic change is still needed today. Reports from The World Health Organization and The United Nations Children’s Fund estimate that around 4.5 billion people either have no toilet at home or one that doesn’t safely dispose of human waste. One third of schools worldwide don’t have toilets available and 900 million schoolchildren don’t have access to handwashing facilities.

To help the cause, the United Nations and other non-profits have reached out to those affiliated with sanitation and hygiene for help.

Issues caused by inadequate toilet technology were also discussed recently by Microsoft founder and famed philanthropist, Bill Gates, during a speech at the Reinvented Toilet Expo. The Bill and Melinda Gates Foundation has spent more than $200 million on researching new toilet technologies in the past several years.

According to the BBC, Gates actually brought out a beaker of feces on stage in an effort to better demonstrate issues with bacteria and sanitation-related disease.

"I have to say, a decade ago I never imagined that I'd know so much about poop," Gates said at the conference, according to BBC. "And I definitely never thought that Melinda would have to tell me to stop talking about toilets and fecal sludge at the dinner table."

The expo took place in China, a nation that hopes to spark a “toilet revolution” within its borders.

Twenty new sanitation products were demonstrated during the event, all of which are intended to better prevent disease.