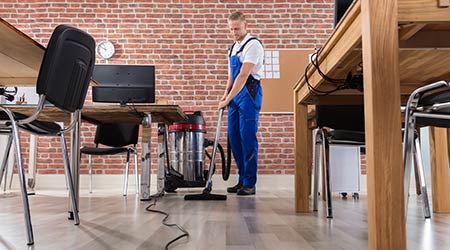 "Has there been consideration for our frontline janitors and cleaners, as it relates to providing immediate raises, and keeping cleaners employed during this time, as well as ensuring that they are all working safely with the required training and PPEs?”

The question was posed by Matthew Green, MP for Canada's Hamilton Centre to the Honorable Minister Anita Anand, minister of Public Service and Procurement, at a Standing Committee on Government Operations hearing.

Not enough consideration, according to Adaego Akor, a janitor.

“The public tries to avoid touching potentially contaminated surfaces. I am asked to do the opposite,” she says. "To clean them to keep everyone safe.”

Akor works for a janitorial contractor who has the account for Tunney’s Pasture in Ottawa, Canada the building housing Health Canada. “Some employers and the government are helping some underappreciated workers, but why not us?” asks Akor. “Why are we not considered for pay increases?”

The Ford government’s provincial Pandemic Pay announcement on the weekend is welcomed news for many workers in Ontario, Canada, including janitors at long-term care facilities and hospitals. It also adds to the growing list of programs that fail to help most low-wage janitors. However, ultimate responsibility to make wage improvements lies with wealthy property owners who have profited for decades by underpaying workers in the sector.

The Canadian federal government is one of those property owners and they are one of Canada’s largest. According to the Directory of Federal Real Property the federal government owns and leases over 37,000 buildings which translates into 27,870,926-square-meters of floor space.

Akor is just one of thousands of voices in the Justice for Janitors movement looking to make desperately needed improvements through the Invisible to Essential campaign, launched by the Service Employees International Union Local 2 earlier this month.

While Canadian janitors have been called heroes during this pandemic, their pay doesn’t match up with the rhetoric. The true value of janitors’ work continues to be ignored by large property owners and the government alike. Janitors say that the federal government should change that and lead by example

Akor makes $15.25 an hour. Thanks to being a union member, she’s above minimum wage, has paid sick days, benefits, a pension plan starting in 2022 and other protections non-union cleaners do not enjoy. Still, she says it's hard to pay the bills.

Unlike other essential workers, Canadian janitors by and large have not received hazard pay to compensate them for increased risk and hard work. The Invisible to Essential campaign is attempting to change that, demanding an immediate $2 per hour raise, freezing cleaner layoffs during the crisis, and ensuring all cleaners are working safely with the required training and personal protective equipment.

Some have made strides. Canada Post for example has made funds available to provide an hourly Hero Pay top-up of $2 per hour for janitors cleaning their facilities. Cushman & Wakefield Commercial Real Estate Services is adding a weekly bonus which works out to $1.25 per hour for its cleaners. Hallmark Housekeeping Services has provided a dollar increase at some of their locations. But it is a drop in the bucket in a sea of injustice; it’s not nearly enough.

“It’s been heartening in recent weeks to hear so many politicians and major public figures showing respect and solidarity for the frontline workers who keep us safe,” said MPP Joel Harden, Ottawa Centre, in a Facebook video published on April 17. “Those words are great. But you know what? They’re also not enough.”

Chris Lockhart, who cleans at a university campus in downtown Toronto, Canada agrees.

“We clean buildings owned by billion-dollar companies," says Lockhart. "It’s time they and other companies recognized janitors hard work during this crisis with more than just empty words of thanks.”

Amado Agamao is one of the few cleaners to have benefited from a raise as he works in a Canada Post facility in Richmond, British Columbia, Canada. “The $2 is a good start, but these non-traditional tasks will stay after COVID-19," he says. "Our workloads will stay high and our work will be more important than ever. The $2 should be made permanent.”