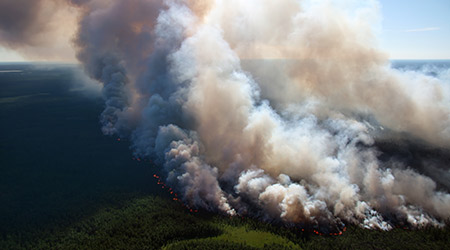 Nearly 90 percent of school districts and some businesses in Sonoma County, California,  shut down Tuesday due to the smoke from the Camp Fire in Paradise that has killed at least 50 people. According to San Francisco Chronicle reports, state officials extended an air quality alert for the Bay Area through the rest of the week.

ABC 10 News is reporting that University of California (UC) Davis, and several other area campuses, closed Tuesday because of the air quality, but decided to reopen the next day while limiting outdoor activity and canceling physical education classes. Students petitioned to have the campus remain closed and as of 4 a.m. Wednesday, the online petition has been signed by more than 15,500 people.

Some local businesses closed to limit exposure for employees who work outside. The Amazon Fulfillment Center near Sacramento International Airport has been closed since Saturday afternoon.

A red “unhealthy air” alert was issued for the region — including San Francisco, Oakland and most of the North Bay —  according to the Bay Area Air Quality Management District (BAAQMD). Officials urged residents to stay indoors. A Winter Spare the Air alert also was extended through Friday.

Jack Broadbent, of the BAAQMD, said in a statement that smoke has blanketed all nine Bay Area counties. Broadbent said additional smoke from area chimneys could push the region into an even higher unhealthy air quality level.

During Spare the Air days, it’s illegal for residents and businesses to use fireplaces, wood stoves, pellet stoves, outdoor fire pits or any other wood-burning devices, according to an article on the ABC7 website.

Additional information is available on The San Francisco Department of Emergency Services website, which has a map of facilities with filtered air, such as libraries and museums.