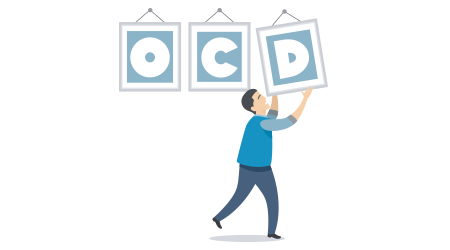 Around the country, people are returning to their offices. This means that the people that clean these offices are also going back to work. But everything has changed now.

While cleaning workers typically take precautions to protect their health when working, they may now take added precautions. Some of these precautions can actually be unhealthy.

According to the American Psychiatric Association, due to fears about COVID, illnesses such as obsessive-compulsive disorder (OCD), that trap people in distressing thoughts and concerns, may surface as people go back to work. For cleaning workers, these anxieties can reduce worker productivity and force some to quit their jobs out of fear of getting sick.

So how can cleaning contractors spot OCD among their staff? Some signs include the following:

- Constant handwashing, to the point it becomes "ritualistic."

- Taking unnecessary precautions when they encounter someone in the building. These are called "justifications." They are not based on an actual health threat.

- Continually turning to news sources to learn more about the virus.

- Showering and bathing three or more times per day.

"We are also seeing this played out in the ways cleaning workers perform their duties," says Matt Morrison, communications manager with Kaivac. "Some workers are wiping down surfaces and mopping floors repeatedly."

Not only is this a sign of OCD, it can negatively impact the health of a facility.

"These workers often reuse the same [cleaning] cloths and mops again and again," says Morrison. "This spreads contamination; it does not remove it."

If contractors suspect workers are developing OCD, they should discuss it with them and see what steps can be taken to help it subside.

Regarding the compulsive cleaning, this is often because cleaning workers are unsure if their cleaning is effective, says to Morrison.

Instead, use single platform, multipurpose cleaning systems that clean and rinse surfaces and vacuum up pathogens.

"These machines provide workers with the certainty they need that surfaces are now contamination-free," says Morrison.