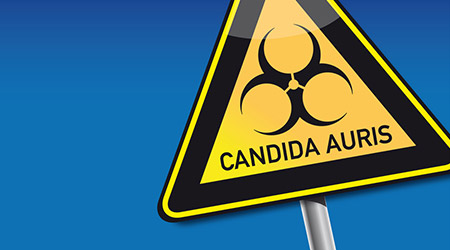 Health experts issued a warning regarding a fungus called Candida auris (C. auris), which has been quietly spreading around the world. The Centers for Disease Control and Prevention (CDC) says almost half of those infected die in 90 days.

According to New York Times reporting, the fungus preys on people with weakened immune systems and in the last five years has hit a neonatal unit in Venezuela, a hospital in Spain, a British medical center, and has taken root in India, Pakistan and South Africa.

More recently, C. auris was found in New York, New Jersey and Illinois. ABC12 WISN reported that solitary cases have been identified in other states and the CDC estimates that nearly 600 cases have been confirmed across the United States.

Due to the growing and global spread, the CDC has just added C. auris to its list of “urgent threats.”

In recent years, superbugs have been a growing threat. As fungus and bacterias become immune to medications, the focus shifts to facility cleanliness, personal hygiene, infection control and a cross-contamination efforts.

If facilities don't change the way they clean rooms, then the Candida will hang out there. It could potentially infect the next person that enters the room, according to Dr. Todd Ellerin, an infectious disease specialist.

The fungus can live on surfaces for weeks if not properly cleaned, CDC officials said.

As cleaning experts are aware, eradicating superbugs is no easy task — it requires specific products and processes. For example, the New York Times reported how one London hospital tested cleaning programs in their fight against C. auris.

With supervision from a infectious disease expert, "hospital workers used a special device to spray aerosolized hydrogen peroxide around a room used for a patient with C. auris, the theory being that the vapor would scour each nook and cranny. They left the device going for a week. Then they put a 'settle plate' in the middle of the room with a gel at the bottom that would serve as a place for any surviving microbes to grow. Only one organism grew back. C. auris."

Meanwhile, at a Brooklyn hospital, a man recently died from Candida auris. Tests showed the fungus was everywhere in his room. The hospital needed special cleaning equipment to fight the fungus, and eventually gave in and replaced some of the ceiling and floor tiles to eradicate it.

To reduce panic, health officials are still careful of confirming that deaths are directly related to C. auris. The New York Times reported one hospital statement: “It is very difficult to discern whether patients die from the pathogen or with it, since they are patients with many underlying diseases and in very serious general condition.”