CDC: Hand Washing Habits Improving, But Could Be Better 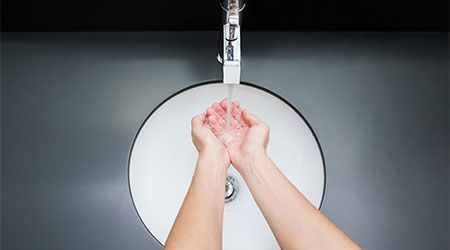 American adults are more likely to wash their hands in several different situations than they were before the start of the COVID-19 pandemic, according to Centers For Disease Control and Prevention’s Morbidity and Mortality Weekly Report.

The report, which uses data from a survey of U.S. adults taken in June, said adults are more likely to wash their hands after eating a restaurant, before eating at home and after experiencing respiratory symptoms, than they were in October of 2019.

Even though improvements seem to be occurring, American adults could do better because the survey shows that about one in four of them still aren’t washing their hands after coughing, sneezing or blowing their nose.

According to the CDC, public health experts say that messaging encouraging frequent handwashing need to be specifically targeted at men, young adults, and non-Hispanic white adults.

The CDC encourages handwashing to always occur after using the bathroom, before and after preparing or eating food, and after coughing, sneezing or nose blowing. During the COVID-19 pandemic, the frequency of handwashing should be increased so that it also takes place before and after making contact with one’s face, after going to a public place and touching a frequently touched surface, and before and after touching one’s mask.

For a more comprehensive look at the findings of the survey, click here.