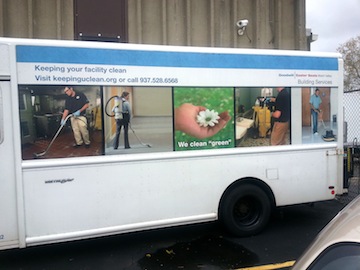 There are probably scores of building service contractors and in-house cleaning professionals that share the same dream. They dream of finding a machine that can solve their cleaning problems, speed up cleaning, and be so cost effective that this “dream” machine pays for itself in just a few months—or less.

Well, cleaning professional Mike Koesters, Business Services Field Operations Manager for Goodwill Easter Seals Miami Valley, in Dayton Ohio, has also had this dream. However, for Koesters, his dream has become a reality in the form of the No-Touch Cleaning system from Kaivac, developers of the no-touch technology.

According to Koesters, whose organization hires primarily people with disabilities and trains them in proper cleaning methods and processes, his company did have a Kaivac system several years ago but had stopped using it.

But as his organization grew—now cleaning more than two million square feet of commercial space per day—concerns mounted about the speed of the cleaning process and how uniform the cleaning was. By “uniform” he means that the organization expected to see the same high-quality cleaning results every time, no matter who used the cleaning equipment, as long as he or she had been properly trained.

To address these concerns, Koesters decided to try a Kaivac machine once again and put it to work at his largest account in the Dayton area. This facility has 42 large restrooms and serves four to five thousand people every day. “We tried the [Kaivac No-Touch Cleaning] system, and in the first week we saw a 25 percent labor savings. So we got a second machine and now have four Kaivacs at just this one account.”

Not only did the Kaivacs cut costs and improve worker productivity, but they also improved the health and appearance of the restrooms on a consistent basis. Koesters was also impressed with the return on his investment. “It did not take long at all to pay for the machines; I’d say they were paid for within about three months.”

The Kaivac no-touch machines have also proven to be a problem solver for his organization. For instance, one client had complained that it would like to see its restrooms cleaner and healthier. The restrooms had been cleaned using traditional methods such as sprayers, mops, and buckets. Koesters brought in a Kaivac No-Touch Cleaning® system one night to clean the restrooms, and the next day the customer called and had changed his tune. Instead of complaining, he was now praising the cleaning, saying the restrooms looked great.

“The Kaivac No-Touch Cleaning systems have helped us quite a bit,” adds Koesters. “They keep our clients happy, they help us speed up cleaning, and they reduce our costs. And, they are good PR…they tell our customers that we are willing to go the extra step to keep their facilities clean and healthy.”