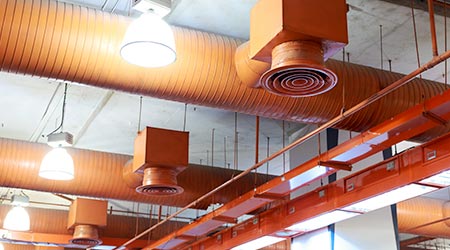 Fresh air is better for you than stale or polluted air, and while increasing ventilation may increase energy use, research shows the benefits of doing so outweigh costs.

While building ventilation standards are based on minimum requirements−specifically ASHRAE Standard 62.1 that stipulates about 20 cfm per person in office space, but less in many cases−increasing ventilation to reduce levels of carbon dioxide (CO2) below previous limits has benefits that include cognitive enhancement, productivity and health.

Carbon Dioxide: More Than a Proxy
Carbon dioxide, a byproduct of exhalation, has been viewed as a surrogate or proxy for indoor air contamination; the more CO2 indoors, the worse the ventilation, and greater the buildup of airborne pollutants that may be harmful to people and productivity.

Now, CO2 itself is considered a contaminant: A cognitive study published in Environmental Health Perspectives found “on average, a 400 ppm increase in CO2 was associated with a 21 percent decrease [in cognitive scores].”

Ventilate to Improve Productivity, Health, ROI
A 2015 International Journal of Environmental Research and Public Health cognitive-effects (COGFX) study in seven U.S. cities across several climate zones, showed doubling ventilation rates from 20 cfm/person to 40 cfm/person, costs only $14-$40 per year/person, but improves productivity by up to $6500 per year/person.

The study “found an eight percentile increase in decision-making performance when ventilation was increased from 20 cfm/person to 40 cfm/person” and by inference, greater productivity. Doubling the rate of ventilation boosted cognitive ability from the 62nd to 70th percentile with the biggest gains in “basic activity, information usage, breadth of approach, strategy and crisis response.”

Testing was done in a LEED platinum building with low emissions of airborne pollutants, but the study found “larger cognitive deficits were observed when chemicals were added to the space.”

The report cited other benefits of greater ventilation, including lower sick leave due to illness, flu and pneumonia, resulting in savings that “dwarf energy costs by a factor of six.”

The study concluded: “The public health benefits of enhanced ventilation far exceed the per occupant economic costs in U.S. cities. Even with conservative estimates, the increased productivity of an employee is over 150 times greater than the resulting energy costs.”

The COGFX study was funded by United Technologies, and while some experts believe the projected ROI may be a bit optimistic, the report provides valuable evidence to support the premise that more fresh air through ventilation is beneficial, yielding returns that far outweigh the investment.