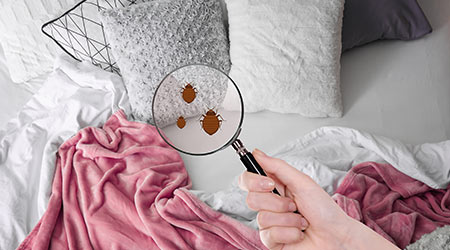 A new season means new bed bug infestations, apparently after the nasty parasitic insects created two recent public disturbances, one on the East Coast and another in the Midwest.

Antonio Woods went into a Detroit-area hospital seeking treatment for severe burns. What he got was bed bugs, according to Fox 2.

A pest management expert told Fox 2 that hospitals are one of the most common site where bed bugs are found. So are schools apparently.

Bed bugs were recently discovered inside a high school in Providence, Rhode Island, reports ABC 6. The school decided the best measure was to relocate classes outside of the room where the bed bugs were discovered. They also treated the two rooms next to the infected classroom.

An insect removal expert told ABC 6 that the school’s methods for treating the situation were correct, and that it’s hard to keep bed bugs out of schools because kids can bring them in from home. To prevent future incidents, he suggested parents periodically check their children’s belongings for bugs

There are different methods to detecting bed bugs. One method, which involves a weekly inspection, was previously shared by CleanLink. For other bedbug related news, search the term on this site.