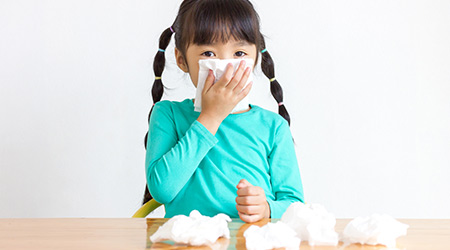 Elementary school children get an average of six to eight colds each school year, according to Johns Hopkins Medicine. High schoolers get about half that. This phenomenon is known dramatically as the "back-to-school plague." But there are ways to fight it, according to a CNN article.

Schools are full of "hot zones" for germs, according to Dr. Harley Rotbart, professor emeritus of pediatrics at the University of Colorado. And while most people think it's the bathrooms, regularly cleaning means the danger zones are elsewhere.

The germiest places in school, Rotbart said, is probably the drinking fountain. It's germier than the toilet seat, he said, but doesn't get disinfected as much.

Cafeteria trays are another germ hot zone because they usually don't get wiped down as well as they should, he said.

Properly washed hands also cut down on gastrointestinal problems, as well as cold and flu. Washing with soap and water is the most effective way to eliminate germs. But when kids can't get to a sink, there needs to be sanitizer with at least 60 percent alcohol handy.

In addition to keeping the plague at bay, research has shown that K-12 school environments have an improved capacity toward learning when they are clean, according to a blog by Ben Walker, director of business development for ManageMen, Inc., a cleaning industry consulting firm.

According to Walker, the most comprehensive study on this subject was conducted in 2002 by Dr. Michael Berry at Charles Young Elementary School in Washington D.C. The study’s main purpose evaluated correlations between educational performance of students and the cleanliness of their physical learning environment.

The study found that the quality of learning is greatly impacted by the overall cleanliness of the indoor environment. Berry reached similar conclusions in research done at the Frank Porter Graham School in 1998 and at the University of North-Carolina at Chapel Hill in 2006.