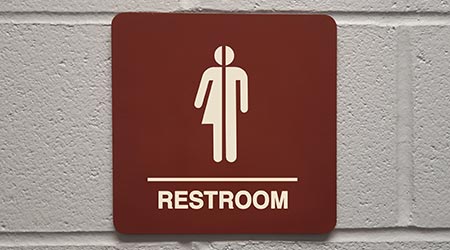 The Tennessee House of Representatives member who sponsored the state's new law requiring businesses and government facilities to post signs if they let transgender people choose the restroom they wish to use said owners and operators who fail to comply with mandates could be jailed.

Owners and operators of such facilities must post signs within 30 days of being warned for not having them up. Republican Rep. Tim Rudd said those who fail to do so could be jailed with a class B misdemeanor for as long as six months.

The length at which a person could be jailed for the violation never came up during debate or legislative hearings pertaining to the "bathroom sign bill," reports the Associated Press. In fact, the news outlet reports Rudd had told other lawmakers in March, that at that point, the bill would not come with any fines or penalties if it became a law. Rudd later said that what he had said in March was in fact true because the bill didn't have any penalty, and the fine or jail time was implemented into an existing building code law that penalizes such things as smoke alarm violations.

Democratic Rep. Bill Beck said the entire committee was mislead by Rudd and his previous statements.

Glenn Funk, the district attorney general for Nashville, Tennessee's capital and largest city, said he will not prosecute any violations of a law that he deems to be hateful, reports the Tennessean.