Association Calls For Changes To Restrooms 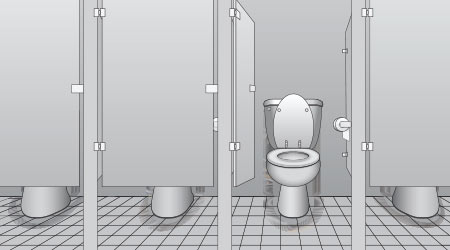 The COVID-19 pandemic has further highlighted the fact that public restrooms aren't exactly the safest place to visit when trying to dodge diseases and sickness. They're also not all that private. That's why the American Restroom Association is pushing to change restrooms in the United States for the better.

Kathryn Anthony, an architecture professor and vice president of the association tells CBS News that there's a lot to improve upon between the walls of the typical restroom. For starters, there's too many high touch surfaces and too much open space.

One fault of the common restroom credits its existence to the favor it received from one of the most famed architects in American history. Frank Lloyd Wright supported restroom partitions that leave open space because he felt it made restrooms easier to clean, reports CBS News. But today these partitions are questioned because they don't conceal enough.

One example of a restroom of the future is found at Bradley International Airport in Connecticut. The restrooms at the airport are totally private and touchless. An open space is no longer needed at the bottom of a stall to view whether or not it's occupied because the stalls at the airport have a light on the outside that demonstrates whether or not they're being used.

As many in the janitorial industry know, toilet plume are the microbes that are shot out of a toilet when it is flushed. Experts are trying to figure out ways to flush the issues of toilet plume for good. Jim Walsh of American Standard says solving the plume problem is all about the velocity, angles and design of a toilet that determines how much plume is shot out.