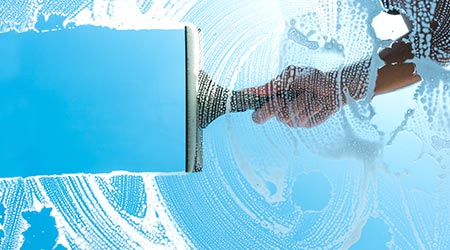 The Cleaning Show, currently taking place in London, featured the first-ever window cleaning world cup, a window cleaning competition that drew competitors from across the globe. According to Daily Mail reports, an American beat out some tough competitors to take home the crown.

"The competition was held in the Window Cleaning Pavilion," said John Lombardo, Vice President Global Marketing and Sales, Unger Enterprises. "Unger is a proud supporter of these window cleaning competitions around the world in an effort to help showcase the 'best of the best' window cleaners."

The competitions are, indeed, a worldwide phenomenon. This particular event hosted window experts from England, Sweden, Ireland and America, to name a few.

Competitors were each given just over 2 gallons of water and a 300mm squeegee. They were then tasked with cleaning three office-style windows. Participants were timed and deductions were applied based on any smears that were left behind.

In the end, Jeremiah Hickey, of On The Spot Window Cleaning California, took home the top prize (just over $1,300) and the title after finishing in just 17.02 seconds.

Hickey, who is 42, is not new to competition. He was also crowned overall winner in the USA’s Speed Window Cleaning contest held in San Diego earlier this year.

Although Guinness World Records officials were on hand, no records were broken. In this particular category, the current world record holder is Terry "Turbo" Burrows of Essex, England, with a time of just 9.14 seconds.

"Window Cleaners are professionals in the truest sense of the word," said Lombardo. "Armed with a washer and squeegee, they are tasked with quickly and effectively cleaning windows around the world. While they take tremendous pride in a job well done, they also have a business component that requires them to get on and off the glass quickly, without leaving streaks or drips (which may lead to a job needing to be redone)."

"At Unger, we work with window cleaners around the world to make best-in-class products, from washers that retain and release the optimal about of water to squeegees that are made with high quality materials and are designed for the best ergonomics during use, to premium grade rubber that glides across glass without leaving streaks or haze," says Lombardo. "Professional quality is why Unger squeegees are the world’s No. 1 choice for true window cleaning professionals."