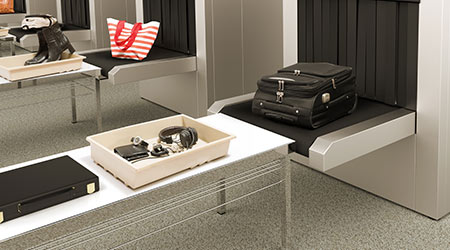 A recent study by researchers in Finland identified the role airports play in transmitting diseases. The study was conducted in the country’s largest airport, Helsinki-Vantaa, which served nearly 18 million travelers in 2017.

Conducted in February 2016, the study was completed during Finland's peak influenza season. Researchers mapped out the pathways used by most travelers in the airport. This determined which surfaces were most likely to be touched and helped narrow their investigation.

Ninety surfaces in the airport were identified as high-touch areas and were swabbed three times per day during peak travel periods. To ensure the validity of the test, the researchers made sure the sample areas had not been cleaned by custodial workers before testing. They discovered that 10 percent of study surfaces hosted at least one respiratory virus.

Most viruses were found on the following surfaces:
•  A plastic toy in the children’s play area;
•  The plastic containers used in the security checkpoint area;
•  Handrails on stairs and escalators;
•  Buttons on the payment terminal at the airport pharmacy;
•  Desks and glass dividers at passport counters.

“What this test revealed is that there are multiple ‘touch points’ in an airport that pose a potential health risk for passengers,” says Brad Evans, Chief Executive of Optisolve, a surface assessment technology that identifies the location of microbial contaminants on surfaces. “We are seeing similar results using imaging technologies in hospitals, schools, offices, restaurants, and even food manufacturing sites.”