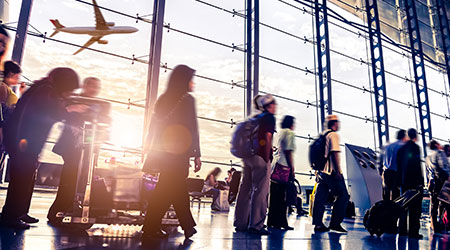 Surfaces in the cabin of a commercial plane can have many times the amount of bacteria than an average kitchen counter, but a recent study found that airport terminals are even worse, according to an article on the Los Angeles Times website.

Insurancequotes.com conducted swab tests on the surfaces of three airports and three airlines. The website did not identify the airports or airlines tested.

The highest concentrations of bacteria per square inch in the airport terminals were found on self-serve ticketing kiosks.

The highest germ counts in the planes were on the flush button on the toilets, followed by the tray tables and the seat buckles, according to the study.

The highest germ counts in the terminals were found on the screens of airport kiosks, bench armrests and drinking fountain buttons.

A similar study three years ago said the buttons on the drinking fountains in airport terminals had the highest germ count.

One airport is tackling terminal germs with self-cleaning mats at its Transportation Security Administration (TSA) checkpoints. The Akron-Canton Airport in Ohio is fighting infections with containers that have special liners in the bins and on the handles.