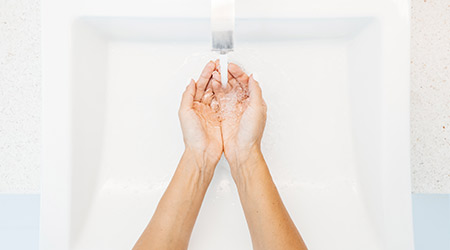 More than 10 percent of British adults still fail to regularly wash their hands after using the restroom, according to Study Finds.

Of the 2,000 Brits polled on their private and public restroom habits, 12 percent say they don't always wash their hands after going to the bathroom. While that figure does seem high  (especially during a pandemic), some of the other responses in the poll encourage optimism. For example, those polled say that they wash their hands an average of eight times a day since the start of the pandemic. That's an improvement, as the average for those polled was five prior to the pandemic. British adults also wash their hands for an average of 19 seconds, according to the survey - a noticeable improvement to the 12 second time they clocked prior to COVID-19.

Those participating in the survey show tremendous improvement in their hand washing practices after coughing an sneezing.

Nearly half (45 percent) of those surveyed say they are hesitant to go back to their favorite bars, restaurants and stores due in part to their concerns for using a public restroom. And masks don't make the situation any better, as only 20 percent say they would feel safer in a public restroom if masks were required.

Handwashing habits were better in the United States at the start of the COVID-19 pandemic than they were before. Ninety percent of those surveyed in April said they were washing their hands more frequently and longer than before.