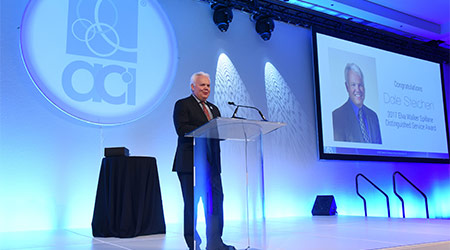 The honor was presented during the 91st ACI Industry Convention in Orlando, Florida.

Dr. Steichen is currently the Chief Scientist for AkzoNobel Specialty Chemicals and serves as the company’s R&D leader for North America.

He served for three years on ACI’s Board of Directors and served as Chair and Vice-Chair of ACI’s Strategic Advisory and Oleochemical Committees.

Dr. Steichen received his PhD in Physical Organic Chemistry from UCLA and worked for The Clorox Company for 11 years managing product, process and packaging development. In 1991, he accepted a position to lead AkzoNobel’s Surface Chemistry Americas research efforts, and in 1997 transferred to Stenungsund, Sweden, as Vice President responsible for the Surface Chemistry strategy and technology function and led the Swedish AB’s country organization.

Returning to the United States, he was the Commercial Director of the Surface Chemistry Global Fabric and Home Care business based in Chicago. In 2005, Dale returned to R&D as Surface Chemistry’s Global Vice President and led the Specialty Chemicals’ R&D function from 2009 through 2011. In 2013 he moved into his current role as Chief Scientist.

“Dale Steichen’s leadership, knowledge and expertise in R&D is renowned throughout the industry,” said Tom O’Brien, 2016 ACI Board Chair and Senior Vice President, Performance Chemicals, Sasol. “Over the years, he has been a strong leader and champion of ACI. As part of the Strategic Advisory Committee, Dale helped put in place ACI’s annual performance survey and strategic plan. His leadership for the oleochemical supply chain has been a huge asset for ACI and the industry at-large.”

ACI’s Distinguished Service Award is named in honor of the late Elva Walker Spillane, the former National Purity LLC chief executive who served on the association’s Board for 20 years.

The award honors an individual for extensive or exceptional service to ACI, who promoted the growth and interests of the Institute and the industries it represents; and who exercised outstanding leadership within ACI.