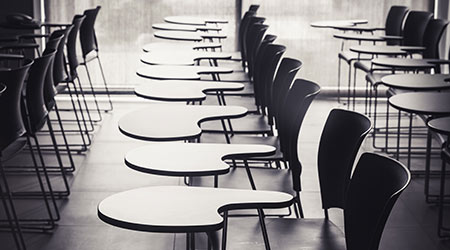 Absenteeism in schools is a significant problem. In many countries, including the United States, school funding is tied to student attendance. Absenteeism (when students miss school), can put that funding at risk.

While many factors contribute to school absenteeism, student illness is believed to be the main driver of student absenteeism. The transmission of pathogenic organisms (microorganisms, bugs, germs, etc.) within schools can result in infections making students too sick to attend classes, which can reduce school funding. Diseases such as influenza (flu), rhinovirus (common cold), and norovirus (vomiting/diarrhea, stomach flu), are common and can be positively impacted by more frequent hand hygiene and routine cleaning and disinfection of commonly touched surfaces. This white paper from Diversey discusses some of the evidence on how hand hygiene can reduce absenteeism for students.

Absenteeism in Schools:
How large of a problem is school absenteeism? The average student in the United States (K-12) misses 4.5 days per school year, while the average teacher misses 5.3 days per school year (Azor-Martinez, 2014.) This results in 164 million lost school days for students per year in the United States (Bright 2009). The website Governing (2019) reports spend per student per year for each state in the US, and reports the average spending per student as $11,762 per year. Assuming a 180 day school year, the average student generates $65.34 in funding for the school district per day. Therefore the total loss of funding associated with student absenteeism each year is $10.7 billion dollars in the US. While illness is not the only reason students are absent, it is believed to be the main reason students are absent from school each day.

This loss of funding does not include additional costs to the school district, such as paying substitute teachers when the regular teachers are out sick. The National Education Association (NEA, no date) reports the average substitute is paid $75- $125 per day depending on their state of residence and their credentials. If the average teacher misses 5.3 days of school per year, this costs the district an average of $530 per teacher, per year. Since there are approximately 3.2 million public school teachers in the US (National Center for Education Statistics, no date), this suggests teacher absence costs districts $1.7 billion per year in substitute teacher costs. Reducing the financial impact of student and teacher absenteeism is a major concern for schools.

The most commonly transmitted infections in schools are respiratory (colds and flu) (Azor-Martinez, 2014.) Gastrointestinal illness, such as norovirus and rotavirus infections can also sicken students and cause them to be absent from school. Both types of these contagious diseases can cause students and teachers to be absent from school and the potential impact of these infections can be reduced by improving hand hygiene practices.

Microorganisms and Survival on Environmental Surfaces:
There is a common, incorrect, belief that even if surfaces in a classroom become contaminated with organisms, the organisms die quickly and thus do not contribute to making students sick. A number of factors are known to influence how long organisms survive on environmental surfaces including the nature of the organism, surface material and temperature, soil level, humidity, and air temperature. A literature review by Kramer (2006) looked at studies that investigated the relationship between various organisms and the length of time they can survive on various surfaces.

The studies reviewed by Kramer investigated specific combinations of these factors and showed that many species of bacteria can survive for months on surfaces while some can only survive for a few days. They also reported that respiratory viruses can generally only survive for a few days, but those viruses associated with the gastrointestinal tract (e.g. Norovirus, Rotavirus) can survive for up to 2 months in the environment. What these studies show is that while the amount of time any specific organism might survive on a surface is highly variable, the typical range is certainly long enough to allow for person-to-surface-to-person transmission to occur, which can cause an infection.

Bright (2009) performed a study of commonly touched surfaces in elementary school classrooms and found that the drinking water fountain handle and the manual pencil sharpener handle were the most contaminated of the surfaces sampled, with Influenza A found on 24 percent of surfaces and norovirus found on 16 percent of surfaces. This is not surprising, since these surfaces are touched frequently through the day and students were not being coached to perform hand hygiene regularly.

While bacteria counts of student hands has not been studied extensively, Prater (2016) sampled the hands of college students in one study and found that 57.7 percent had extremely high bacteria counts, indicating infrequent or improper hand hygiene and that lower bacteria counts on hands correlated with less illness during the prior school year.

Hand Hygiene and Absenteeism:
A number of published studies show that absenteeism can be reduced by 5-10 percent by placing more emphasis on hand hygiene in a school through things like education programs on hand hygiene and encouraging the use of alcohol based hand rub (ABHR) (Azor-Martinez, 2014.) One recent study, in Spain at 5 state schools, had students either wash their hands using soap and water, or wash their hands followed by using ABHR. This study showed a 32 percent reduction in days missed per academic year suggesting that hand washing followed by ABHR is more protective than hand washing or ABHR alone and may offer the largest opportunity to reduce absenteeism (Azor-Martinez, 2014).

Scientific Literature Reviews:
Two major literature reviews have been done of studies investigating the relationship between hand hygiene and student absenteeism and the two reviews came to somewhat different conclusions. Wang (2017) and Wilmot (2015) both conducted literature reviews of studies on hand hygiene in education settings and found that the literature shows that frequent hand hygiene can have an impact on infection rates and student absenteeism. It was hard to determine, however, how much respiratory illness or gastrointestinal illness or both could be reduced by more frequent hand hygiene, with each review article stating different conclusions and the reviewed studies showing a range of results.

In discussing the quality of the studies, both authors concluded much of the literature in this area is of low quality, which may account for the high variability in results. As a result, the literature should be viewed as needing more high quality studies to determine the degree of the relationship between hand hygiene and student or teacher absenteeism. However this does not suggest there is no relationship, just that it needs further investigation to determine the degree of impact.

Summary:
Student absenteeism is a major risk of funding for schools and student illness drives most of the absenteeism. There is likely a link between hand hygiene and student absenteeism in schools, but the current quality of evidence is not strong enough to determine the strength of that relationship even though some studies have demonstrated a strong relationship between hand hygiene and reducing student illness.