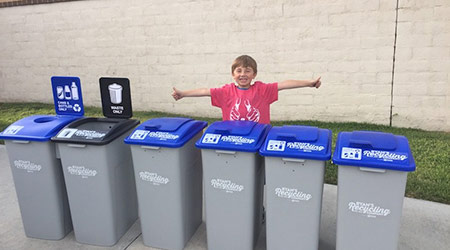 At just eight years old, Ryan Hickman is already making a huge difference. For the last five years (since he was just three years old), Hickman has been advocating for improved recycling in an effort to keep sustainable materials out of landfills and oceans.

According to Busch Systems reports, Hickman launched his efforts by asking his family, neighbors and parent's coworkers to contribute to his recycling efforts. To date, people all over Orange County, California have recycled over 73,000 pounds of reusable materials.

Launching his recycling movement has not been easy, but Hickman has gained awareness through appearances on the Ellen DeGeneres Show, 60 Seconds Docs, CNN and was on the cover of The Capistrano Dispatch’s Green Issue. The recognition has helped earn him some donated recycling receptacles to help further his efforts. And by 2016, Ryan's Recycling hit a milestone $10,000, for which he hopes to use in the purchase of garbage truck.

To read more of Ryan's story and to learn how to contribute to his efforts, click here.