10 Facts About Climate Change And Water 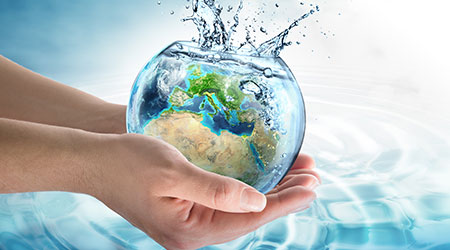 It is now clear our climate is changing. Why this is happening is not for our discussion here.

What is for discussion is that we are experiencing more wildfires and drought in California, and areas of the country are getting drier and hotter on a more permanent basis. Climate change is also having a significant impact on water, according to Klaus Reichardt, CEO,and founder of Waterless Co., the first manufacturer of no-water urinals in the U.S.

“It is causing flooding in some areas of the world and drought in others. These changes are making a considerable impact on the lives of millions of people, especially children.”

To get a better grasp of what is happening, here are 10 things Reichardt says we need to know about climate change and water:

1. Changing weather patterns make it more difficult for some areas of the world to access safe drinking water.

2. Children are considered the most vulnerable group impacted by climate change and water.

3. About 500 million children live in high or extremely high vulnerability due to water resources.

4. By 2040, it is expected that one in four children will live in areas of extremely high vulnerability due to water resources.

5. Every day, at least 700 children under five years of age die due to inadequate water or unsanitary water.

6. Climate change is resulting in disruptive weather events, most of which involve water.

7. Rising temperatures lead to harmful pathogens getting into freshwater sources; these can be health-risking if consumed by humans.

8. Rising water levels are causing fresh waterways to become salty; this can be dangerous to aquatic life and vegetation accustomed to fresh water.

9. Water shortages are expected to exacerbate quarrels between neighboring countries.

10. High-income countries use about 60 percent of their water for industrial purposes. Water shortages and droughts are likely to have detrimental economic impacts.

“While things do look challenging, we must remember that water technologies, including waterless urinals, have made a significant dent in water consumption around the globe,” says Reichardt.  “In the future, we can expect this to continue.”

Professionals in the commercial cleaning industry can play their part in limiting the impacts of climate change. For tips and advice, click here.