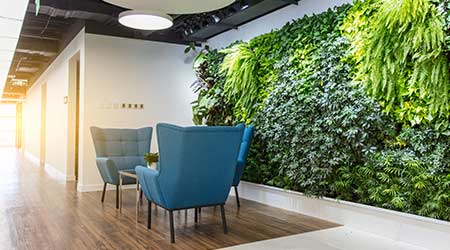 The COVID-19 pandemic will have a huge impact on the way future offices are situated and operated. While the changes that will eventually be made to the modern office haven’t been completely determined, green buildings should be involved, suggests The Atlantic’s Re:Think.

Green buildings first became popular because of the positive impact they can have on the environment. That’s because a green building is one that produces less waste and uses less energy. But it became more apparent that the benefit of having business offices in green buildings goes way beyond environmental impact. Green offices positively influence the health and well-being of workers, which just so happen to be the most important resource of any business.

Today, businesses are being sold on green buildings because of how good they are for both the planet and people. For the most part, it’s the impact these buildings have on employees that attracts businesses.  Which makes sense, considering surveys cited by the Atlantic.

A 2015 survey of officer workers in 16 countries revealed that employees are happier when they work in a green office with natural features, like plentiful exposure to sunlight and indoor plants.  A great majority (80 percent) of people surveyed by the U.S. Green Building Council in 2018 said better air quality in the office has made them feel better, both physically and mentally. Even more said that outdoor views and natural sunlight make them more productive.

“The great thing is we can still get people to the same outcomes, just through a different call to action,” Rachel Hodgdon, president and CEO of the International WELL Building Institute (IWBI) told Atlantic Re:Think. “Much of the time what’s good for the planet and what’s good for people are the same.”