How A Cleaning Service Franchisee Helps Those In Need 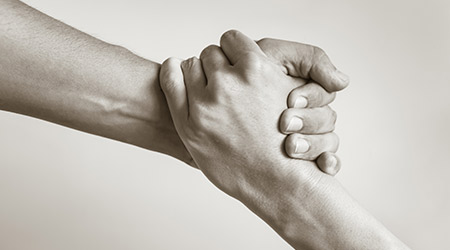 Sheri Marshall has found her purpose, and it’s much bigger than commercial cleaning. Marshall and her husband, Roger, who own and operate Office Pride Commercial Cleaning Service of Richmond-Sandston, are grateful for a business that allows her to offer a hand to people who need help.

Marshall works with local organizations to provide jobs to people who are homeless, in drug and alcohol recovery programs or on parole and working to get their lives back on track.

“Especially starting out, janitorial can be a tough industry,” she said. “My work with nonprofits has been a very satisfying avenue. I’m from a customer service background and love to please our customers. But the thing that drives me is knowing that I’ve had a hand in helping people.”

Life hasn’t always been easy for Marshall. She grew up in a dysfunctional home. In 2008, a series of misfortunes cost both her and her husband their jobs, and they lost everything. In an effort to get back on their feet, they became long-haul truckers and hit the road with their 9-year-old, whom Marshall home-schooled.

“I was angry at first. I didn’t want to give up everything and live in a truck,” she said. “But when I accepted the situation, we were able to become a tool for good. I always have had a heart for people and hated to see people struggle, but that really grew in me while we were on the road. God brought all kinds of people into our path: transients, the homeless and the addicted. To be able to extend ourselves and help people was amazing.”

A few years later, the couple met Office Pride area developers at a homeschool convention. The Marshalls were intrigued but simply could not afford to start a business. After praying about it for seven months, they were about to give up on the idea of becoming Office Pride franchise owners. That was until some people at Office Pride provided help and the Marshalls got the financing they needed.

"I remember being in Florida for training with other new Office Pride owners, and I was moved to tears, because it was all so surreal," said Marshall. "I thought, ‘How did we get here, with this great opportunity?’ Even now, six-and-a-half years later, I am in awe by how we were blessed.”

The Marshalls opened their franchise in March 2014. For the first 8 months, they worked side by side in their business, but cash flow was a problem. Roger returned to the road to financially support their household and sustain the fledgling business.

“He was my strength, even while he was on the road,” Marshall said.

Luckily, Roger came home for good this spring, just before the pandemic hit.

Meanwhile, Marshall dealt with the day-to-day challenge of finding dependable employees for the business. She forged relationships with local groups like Henrico County Mental Health Services in Virginia, which presented her with their Partnership Recognition Award in 2018 for her commitment to hiring people with disabilities. She also works with Real Lives, which offers job coaching to people in recovery, and Foster Arcadia, which supports kids transitioning out of foster care. Her work with nonprofits earned her Office Pride’s Salt and Light Award for community service in 2019 and Franchise Business Review’s “Rock Star Franchise Owners” award this year.

The nonprofits send Marshall people who are motivated to work.

“The people I get from these programs are screened very well, and they stick with it,” she said. “These people, who have been through hardships and lost everything, or who have challenges – they show up, are happy to be working and are grateful for the opportunity.”

Marshall tells the story of a young woman, referred by one of those organizations, whom she hired as a part-time cleaner and then as an office worker. Before long, one of Office Pride’s clients, impressed by the young woman’s customer service and work ethic, offered her a full-time job with benefits. Marshall sounds like a proud mother when she talks about how far the woman has come.

“You can’t help but have empathy for people, especially when you meet people who are truly working to rise above the things that have happened to them,” she said. “I went through a lot of hurting in my life, and I hate to see other people hurt. The Bible says we need to carry each other’s burdens. I am just trying to do my part.”