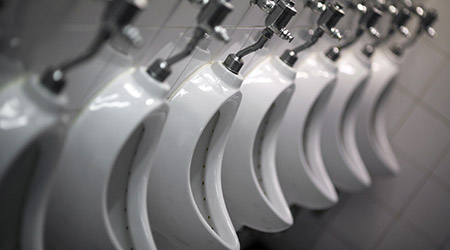 Ladies may not know this, but often urinals in men's restrooms in bars and restaurants are filled with ice. Sixty or more years ago, even high-end hotels made sure their urinals were packed with ice throughout the day.

But why? Well, it has a lot to do with odors and taking aim.

To help us resolve this puzzling question, we turn to Klaus Reichardt, Founder, and Waterless Urinal CEO of Waterless Co, manufacturers of waterless urinals:

• The first urinal was patented on March 27, 1886, by Andrew Rankin; "he referred to his invention as 'the best thing on earth,'" says Reichardt.

• Realizing there might be "disagreeable odors" coming from his urinals, Rankin also included a homemade recipe to make the first urinal blocks using sugar, molasses, syrup, chloride of soda, water, and other ingredients.

• This recipe became cumbersome, so in the 1880s, an astute entrepreneur started marketing the first urinal cakes made with Naphthalene. "It sure killed the odors, but it also destroyed red blood cells when inhaled in large quantities. By the early 1900s, it was slowly phased out."

• Which brings us to ice. When Prohibition started in 1920, speakeasies opened throughout the country. The speakeasies purchased tons of ice. To make way for new deliveries, the old ice was tossed into urinals mainly because throwing it in alleys or on the street would likely catch the attention of police.

• To bartender's surprise, the ice eliminated urinal odors. As one expert explained, the ice froze odor causing molecules in urine, preventing them from being released. Eventually, the odor-filled molecules melt with the ice and drip down the urinal and into the sewer.

• The heyday of ice in urinals was the 1960s; bar owners found the ice provided a bit of entertainment for the gentleman and improved their aim; "having something to aim at reduces spillage," said Richard Thaler, a professor at the University of Chicago.

"Ice is on the way out today if for no other reason to reduce water and energy consumption," explains Reichardt. "Good, even fun while it lasted, new technologies, especially on no-water urinals just eliminated the need."