Cleaning: Infection Control
Get A Leg Up On Legionella
BY Jake Meister, Associate Editor 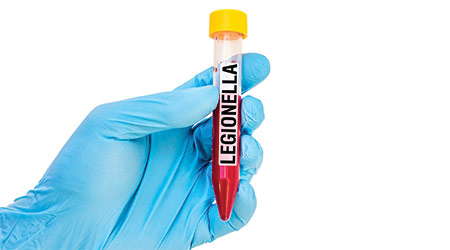 Compared to some other diseases, Legionnaires' disease hasn't been an issue for too long. In fact, the first known outbreak of the variety of pneumonia didn't occur until the American Legion's 1976 convention in Philadelphia celebrating the 200th year of America's existence. The bicentennial celebration made its own history as more than 200 people were sickened — more than two dozen of which died.

Though tragedies like that of 1976 are rare because the disease seldom causes outbreaks, Legionnaires' disease cases have risen more than 200 percent over the last 20 years, and the majority of cases go unreported, according to Sarahann Rackl, Ph.D., senior manager of Exponent, an Austin, Texas-based engineering and scientific consulting firm.

Health officials worry cases will continue to rise after facilities shut their doors due to COVID-19, making them a potential hub for Legionella, the bacteria that causes Legionnaires' disease and a related illness called Pontiac Fever. Pipes that haven't been used for months form biofilm. The darkness and warmth of a building that's been shutdown, along with nutrients that are just sitting there, help to breed disease.

"The New York Times reported on Aug. 27, 2020 that Legionella had been detected in a number of schools in towns across Ohio and Pennsylvania," says Rackl. "Typically, classrooms don't have water features that are sources of Legionella. However, the faucets in the bathrooms and showers in athletic facilities may have remained unused for more than six months."

As businesses continue to open and workers are re-introduced to the office, the threat of Legionella remains as significant as ever. In-house facility cleaning managers are advised to learn more about the bacteria, where it's found, how it spreads and how it is handled.

Legionella is rarely transmitted through person-to-person contact, but rather through incidents where someone inhales contaminated water droplets that have been aerosolized or comes into contact with infected water sources. The fact that Legionella is waterborne makes it a threat in schools, hospitals, senior care facilities, commercial properties or any facility in which people gather.

Legionella can sometimes be found in natural areas and freshwater environments, but that's not the concern here. What facility managers need to be aware of is the fact that Legionella gets into human-made water systems, which allows the bacteria to get into water heaters, cooling towers, decorative fountains, HVAC systems, hot tubs, sink, shower and bathtub faucets and drinking fountains (though it's more rare that exposure occurs through drinking water).

The problem with HVAC systems, in particular, is that they often feature coils where condensation collects. If that condensation comes from an infected water source, then it's just sitting there, primed to be aerosolized.

"Literally, that bacteria is just blown around," says David Trinks, CEO of Trinks Consulting Group, Franklin, Massachusetts. What makes matters worse is that many of the buildings that went up in the 1970s and 1980s have older HVAC systems that Trinks say were not built with the health of people in mind.

Like HVAC units that have sat untouched, plumbing that hasn't had water flow through it for some time is a prime target for Legionella. What's worse is that Legionella incidents are already associated with larger buildings that have more complex water systems, because water stagnation is more difficult to prevent in these facilities. They are also more likely to have large cooling towers, devices that experts say are also susceptible to Legionella.

"Buildings such as hospitals and hotels more commonly have unused rooms where the water may sit for a period of time and typically include the more common sources of Legionella," says Rackl.

It's unfortunate that hospitals, nursing homes and assisted living facilities are vulnerable to Legionella because, as discussed earlier, it's the inhabitants of those facilities that are generally more susceptible to getting sick.

According to Garrett, those who are most likely to be harmed by Legionella are:

People who become sick after becoming infected with Legionella can develop Legionnaires' disease or Pontiac Fever. In terms of symptoms, Legionnaires' disease is similar to other types of pneumonia, according to the Centers for Disease Control and Prevention (CDC). Those symptoms include cough, fever, shortness of breath, muscle aches and headaches. Less common symptoms include diarrhea, nausea and confusion. The symptoms generally begin to show between two to 10 days after exposure.

next page of this article:
Preventing Legionella Made Simple