Cleaning: Carpet Care
Reaching Into The Rafters
BY Nicole Bowman 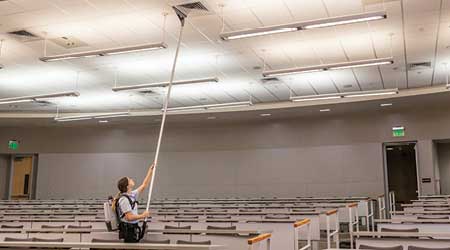 The building services department at the University of Washington has an ergonomics program dedicated to ensuring staff is safe and efficient when performing cleaning tasks. And when it comes to vacuuming, especially in high spaces, they’ve found specific considerations that really help keep workers safe and comfortable. The goal is to choose equipment and processes that ease repetitive or tricky tasks and increase productivity.

Most importantly, says Woodard, “It’s about taking care of our team.”

Training focuses on processes that protect the back and shoulders, teaching staff about the anatomy, as well as simple tricks that can increase efficiency.

“In terms of high dusting and vacuuming high surfaces, ergonomically, you want to reduce the time someone is extending their arms over their head,” says Woodard. “That’s putting pressure on their shoulders. You want to protect the shoulders as much as possible.”

“If you’re using a vacuum, make sure the harness is worn properly, that it’s fitted properly and that you have the right number of extension tools,” says Woodard.

This will ensure that the vacuum is fitted properly, eliminating discomfort and the potential for injury. But it’s not just about the equipment. Rest is important, too.

“If it’s an extensive amount of work to be done in a high area, then you must give yourself breaks,” says Woodard. Or, he suggests leaving the high-vacuuming periodically to complete another task, and then coming back to it.

Dust particles are more than just dirt. The reason that frequent, regular dust removal from all areas in a building is imperative to the health of the indoor environments and building occupants is because of all the other particles that attach to dust.

“It’s not just dirt you’re breathing in, but all the other bad actors that coat the dust,” says Shaughnessy.

He adds that some of those bad actors include pollen, allergens, chemical residue, heavy metals, pesticide-laden allergens and semi-volatiles, for example.

“Once this dust and dirt gets inside the facility, having a program to guide you on a continuing efficient basis to pick that up is very important,” says Shaughnessy.

That dust has been linked to health problems, most notably asthma in schools. According to the Centers for Disease Control, asthma is a leading cause of illness among children in the United States and one of the leading causes of school absenteeism, too.

“When you are vacuuming high places with an attachment, you are performing a massive health intervention,” says Rathey.

In addition to the health service, tending to high surfaces will reduce long-term costs. Frequent, regular vacuuming of hard-to-reach spaces lessens the amount of dust in the indoor environment, meaning that staff will need to perform the process less as they gradually eliminate the buildup.

As a team, it’s important to communicate the cost-savings and health benefits of performing this task with key stakeholders, but it’s just as important to let the staff in on the secret, too.

“If people understand why they are doing things, they are more apt to do them correctly,” says Merrihew. “We start our training in orientation with the science and value of cleaning — including dusting and vacuuming — and how their actions impact the built environment and those working in it.”

NICOLE BOWMAN is a freelancer based in Philadelphia, Pennsylvania.