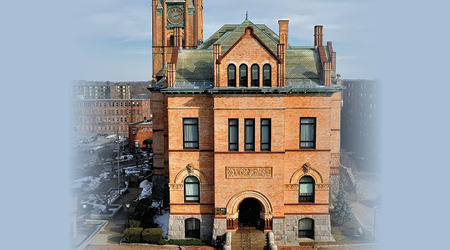 Pigeons wreaked havoc on the city hall in Brockton, Massachusetts. The 19th century Romanesque Revival building located in the center of the city was covered in bird droppings. People would get it on their shoes and cars. In addition, the building’s stairs and surrounding areas were completely covered.

The building superintendent, James Casieri, knew something had to be done to prevent the pigeons from taking over the building.

He contacted Bird-X, a humane bird and pest deterrent retailer, to discuss his problems. Humane bird control focuses on changing bird behavioral patterns, rather than harming birds. The solution was to go with a sonic and ultrasonic device called the BroadBand PRO, which emits distress and predator calls, as well as high-frequency noises.

Casieri experimented with sounds and decided the noise setting that emits the sound of a sharp-shinned hawk had the best results. Only birds hear the high-frequency ultrasonic sound waves.

“The pigeons were gone almost instantly and on their own,” he said. “I didn’t have to kill any.”

The speakers attached to the BroadBand PRO emit sonic noises of naturally recorded distress calls and predator cries. The sound waves are used to disorient the birds, while the sonic noises are used to warn them. The sharp-shinned hawk predator call that Casieri decided to use resembles the sounds of the peregrine falcons that live nearby. Since these pigeons are familiar with falcon calls, these sounds were the most effective for intimidating the pigeons.

With sonic and ultrasonic bird control technology, sounds emit in randomized patterns to keep pigeons or other pest birds from becoming acclimated to the noises and frequencies.

Buildings that are affected by bird problems and damage from bird droppings often have to pressure wash the entirety of the building to ensure no hazardous waste remains. The average cost for specialized pressure washing in Brockton is between $0.40 and $0.80 per square foot, or roughly $55 to $80 per hour. Along with valuable time, a substantial amount of money is saved every year on maintenance costs and repairs.

The city paid $1,000 for the BroadBand PRO, but Casieri said the results were well worth the price, and the product is effective in keeping pigeons away, which ultimately means the façade and integrity of the building remains intact, and will for years to come.