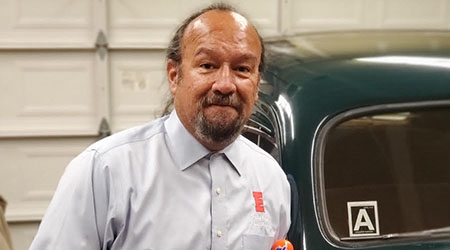 As a custodian with the same school district for 40 years, it’s almost poetic that the people who cleaned the classrooms of Marcos Orozco’s childhood are more vividly remembered by him than those who taught. That’s not to say Orozco, now the head custodian at East High School in Salt Lake City, has anything bad to say about his former teachers. It’s just that the wisdom and character of the custodians — two named Percy and George, in particular — still resonates with Orozco decades later. These two men took the time to really listen to students, and they even gave Orozco some lessons in their trade while he was still learning about life in their high school hallways.

After high school, Orozco joined the United States Marine Corps, from which he was honorably discharged in 1977. Two years later, he left his childhood home of Los Angeles for Salt Lake City, where he would appropriately take a job as a custodian. It would make sense for the story to be that Orozco stuck with the custodial industry from that point on, right? Well, the thing about youth is that it often makes it difficult to identify a good thing while it’s there. As a result, Orozco actually left the district shortly after starting in 1979, a decision that he would quickly regret.

Recalling the decision, Orozco says he would routinely go to his former boss at the Salt Lake City School District, just to tell him he was ready to come back. Each time, he was told there just wasn’t an open position to offer. Finally, about a year later, someone with the district’s human resources department called up Orozco asking if he would like to return. Having been hoping for that call for so long, it was actually hard for Orozco to believe.

“I thought it was actually a joke,” he says.

Luckily for Orozco, the district was serious. He was so giddy about the offer that he told them he could start that day — and he would have if the district didn’t advise him to give his current employer the traditional two week’s notice.

In due time, Orozco was back for his second stint at the Salt Lake City School District where he tackled tasks at an elementary, intermediate and high school.

Around 1984, Orozco was promoted to the head custodian position at Emerson Elementary School. It was there that he first met Mervin Brewer, who was the night supervisor at the school. While they only worked together for four months — Brewer was promoted to a position at one of the high schools — Orozco left an impact on Brewer.

“I remember Marcos as a good boss,” recalls Brewer, now the district’s assistant custodial supervisor and Orozco’s supervisor for the past 15 years. “He corrected me when I needed correcting, but he also was very clear in his expectations and what he needed me to do.”

Orozco credits those early leadership skills to his service in the Marine Corps, so it was only fitting that he bring this experience full circle. When he went back into active duty for a year as a member of the United States Army in the early 90s, it was the custodial work that Orozco says helped him to manage other members during that endeavor.

next page of this article:
More Than Just Cleaning Staff