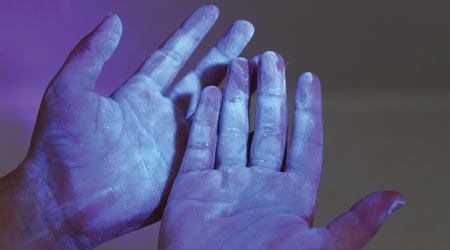 Experts often cite handwashing as the single most important practice in controlling the spread of germs. But what if washing hands left them more bacteria-ridden than they were before a person washed them?

Bacteria from the “bulk” or refillable soap dispenser will remain on the users’ hands even after using the soap, says Dr. Gerba. These include pseudomonas aeruginosa, which cause skin rash, as well as eye and ear infections, and fecal bacteria, which are very tolerant to soap.

Study results further demonstrated that bacteria from contaminated hands can be transferred to secondary surfaces — leading to the conclusion that washing with contaminated soap not only defeats the purpose of handwashing, but may contribute to the cross-contamination of potentially harmful bacteria.

So how does bulk soap become contaminated? According soap manufacturers, germs are typically introduced to the dispensers when they are being refilled.

“Any bulk soap dispenser can come into contact with germs through the environment,” says Dan Renner, director of marketing for Kutol Products Company, Sharonville, Ohio. “It can be via dirty hands, dirty rags, water or particles in the air during the refill process.”

In some cases, the introduction of contaminants could be intentional. Refillable soap dispensers are easy targets for vandals, says Thom Wojtkun, market development director for GOJO Industries in Akron, Ohio.

“Open systems are prone to being vandalized,” he says. “Someone with malicious intent can open them and put something into the dispenser. So there’s definitely an unnecessary public health risk [with open systems].”

Ideally, bulk dispensers should be cleaned every time they are refilled — but this is seldom done, according to manufacturers.

“Depending on the environment, type of soap and maintenance, it can take just a few months for these bulk dispensers to become contaminated,” says Isabelle Faivre, vice president of marketing, Deb Group, Charlotte, North Carolina. “The U.S. Center for Disease Control and Prevention recommends that if you use a bulk dispenser you take it off the wall and wash it each time you refill. But as we know, there aren’t many facility managers that will do that because it isn’t convenient.”

Janitors are more likely to top off soap levels when they become low, thereby increasing the risk of contamination.

“When you open the lid and see mold around the edges, that’s the first sign that something’s wrong,” says Faivre. “Then you start to see things floating in the soap and the residue building up at the bottom.”

Even when refillable dispensers are cleaned and disinfected between refills, they can quickly become re-contaminated.

“We’ve seen that when a bulk-type system is cleaned as it should be, it is likely that contamination will resurface,” says Wojtkun.

Dr. Gerba’s research confirms this: A number of cleaning procedures were used to rid the dispensers of bacteria, but the results were poor.

“It would take 15 to 20 minutes to clean each dispenser, which would be a cost factor for cleaners, especially if you have a large restroom,” says Dr. Gerba. “We don’t think that would be practical, even if it did work.”

“The process of pouring soap out of a gallon jug into the reservoir can be messy and labor intensive,” says Wojtkun. “So from a service standpoint, that can be an issue.”

For facilities that currently offer bulk soap dispensers, Dr. Gerba recommends switching from an open system to a sealed-cartridge soap system. Sealed systems are not only more hygienic, but easier to maintain, according to manufacturers.

“Sealed soap systems eliminate the risk of contamination through contact or the environment, making them safer and healthier for the user,” says Renner. “Every sealed soap cartridge is fresh, clean and germ-free. When it’s put into the dispenser, there’s no way to open it and contaminate it, or allow air or water in.”

For departments with tight budgets, Faivre recommends focusing on potential labor and time savings associated with the sealed systems.

“One of the benefits of a sealed system is the maintenance,” she says. “When we measured the time it takes to change a cartridge, we found that it takes six seconds to switch out a cartridge, versus 30 seconds to top off a bulk dispenser.”

Bulk dispensers can also be difficult to refill, resulting in spills and drips that take additional time to clean up.

But most importantly, manufacturers encourage managers to promote the health benefits of a sealed soap system and their effect on handwashing compliance.

“The benefits of a sealed soap system are healthier building occupants, as well as less illness and absenteeism,” says Renner. “Contaminated bulk soap can transfer to the hands, which in turn can be transferred throughout the facility, spreading germs to others.”

Managers should also consider the clean look of a sealed system when purchasing.

“A facility cleaning manager doesn’t want to have to explain a nasty-looking dispenser or answer to a complaint about sick or unhappy employees or visitors,” says Renner. “Dirty, unsightly dispensers quickly discourage handwashing, which is the single most effective defense against the spread of colds, flu and other illnesses.”

A clean, attractive-looking soap dispenser not only encourages handwashing but elevates the image of the restroom — and, by extension, the company.

“The restroom is the source of most complaints,” says Wojtkun. “Whether it’s a school or office building, better stocked, cleaner, neater restrooms can make students and tenants happier.”