Cleaning: Green Cleaning & Sustainability
Is Your Recycling Program In The Dumps?
BY Keith Schneringer 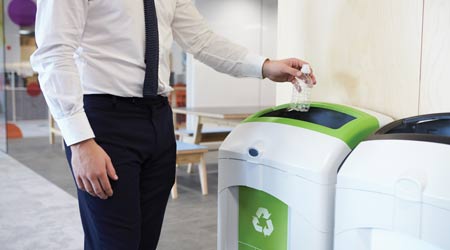 It is a “dirty” little secret that there is a high percentage of contamination in the recycling stream.

What does this mean?

It means that bins identified as holding recyclables also include trash.

Recyclables are materials which can potentially still be used in place of virgin materials to create new products. But, if these items are mixed with trash, they are no longer usable and have little-to-no value. The entire “contaminated” bin must be placed in the waste stream instead of the recycling stream.

Contamination is frequently the result of what is called “hopeful recycling.” In other words, items which probably should be thrown in the waste stream are instead thrown in the recycling stream with the “hope” that it will be recycled. Common culprits of “hopeful recycling” include pizza boxes (which have been saturated with leftover food grease), disposable coffee cups (which are lined with liquid-proof polyethylene), yogurt cups (which are made from non-recyclable plastics), oily takeout food containers (which still have leftover food and liquids), plastic shopping bags (which clog up recycling machinery) and dirty diapers (apparently people are trying to recycle these?).

As a matter of fact, the widespread contamination of the recycling stream has resulted in what many are calling a crisis in the U.S. recycling industry.

One proposed solution to reducing the high incidence of contamination is standardized labeling on waste and recycling bins. To help, the non-profit group Recycle Across America announced a partnership between several leading manufacturers of waste and recycling receptacles. They have all committed to standardizing labeling in an effort to alleviate potential confusion that often leads to contamination in the recycling stream.

Think about it — what if there were multiple designs for stop signs, or if the speed limit was communicated in many different formats? There would be mass confusion. With the proliferation of different messages on recycling bins (or in some cases, the lack of any sort of message at all), it is understandable that there is a high incidence of contamination.

According to Recycle Across America Founder and Executive Director Mitch Hedlund, “There has been an environmental bottleneck as a result of public confusion, apathy and skepticism with recycling, due to hundreds of thousands of inconsistent labels on bins throughout society. Since recycling is considered to be the cornerstone of the environmental movement, its chronic dysfunction has stagnated progress.”

Hedlund continues, “A recent New York Times article, The Conflict of Interest that is Killing Recycling, helps explain some of the deep-rooted issues that have been intentionally hindering progress with recycling. Having these great leaders of industries step up to fix the public’s confusion at the bin using a standardized label solution, is so critical at this time.”

This call for standardized bin labelling is echoed by several other prominent voices responsible for facility management and waste diversion efforts.

According to Lin King, the zero waste manager at University of California Berkeley, “The key to eliminating contamination is to make sure you first manage what is going into the recycling stream — clear, simple and consistent signage and bins are needed so there is no confusion. Use different colors and top-loading bins with restrictive lids. Hold brown box lunches to educate building occupants on reusable items in place of disposable containers they have to either recycle or landfill.”

In addition, Hedlund recommends, “Minimize the distance the item needs to travel. If the appropriate collection container is too far and another collection bin is close but is the wrong one for that item, the bin closest may be mistakenly chosen out of ease. Implementing the standardized labels for recycling bins/carts is just as important as having the correct bin/cart in the right location.”