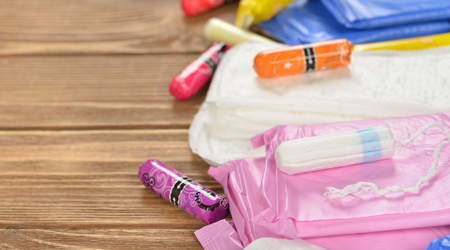 Along with toilet tissue, paper towels and hand soap, facilities nationwide are beginning to stock women’s restrooms with complementary tampons and sanitary napkins. The initiative to offer these items free of charge began amidst controversy over the so-called tampon tax categorizing feminine hygiene products as a luxury item.

In most states, tampons and pads are considered nonessentials, on par with candy and manicures, and taxed accordingly — a charge that has led to heated debates over what critics claim is a discriminatory tax against women.

Some states are beginning to fight back. In July 2016, New York became the 11th state to eliminate taxes on menstrual products. That same month, the city passed legislation to provide free menstrual products in all public schools, shelters and correctional facilities. And beginning in 2018, Illinois will follow New York’s lead and introduce a new state law requiring all schools to provide free feminine hygiene products in restrooms.

Many student-led initiatives are also underway at colleges and universities. According to Newsweek, Brown University, in Rhode Island, was one of the first higher-education institutions to implement a free tampon program. The initiative was led by Brown’s student body president, Viet Nguyen, who, with the help of fellow students, hand delivered menstrual products to all nonresidential restrooms and committed to replenishing stocks once a week.

At North Carolina State University, members of the student government are preparing to roll out a similar initiative.

These are just two examples of what is happening on campuses around the country.

“This is a movement,” says Bill Hemann, vice president of sales-healthcare/national accounts at HOSPECO, Cleveland. “The goal is to permanently change the definition of a well appointed women’s restroom. That means putting up a [menstrual product] dispenser, just as you would a soap or paper towel dispenser. It should be a given, not a maybe.”

next page of this article:
Schools Pilot Free Tampon Program