Cleaning: Business & Industry
What Can Be Done to Make Floors Safer?
BY Russell Kendzior 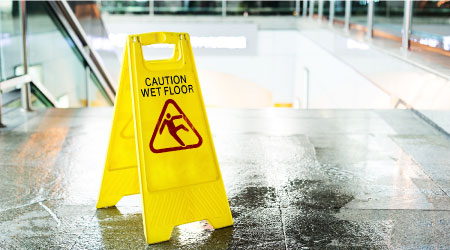 Periodic testing of the floor’s slip resistance is the most important thing departments can do to determine a floor’s potential slip risk. The results provide valuable information and confirmation that walkways are in compliance with the national standards.

Not only will regular testing help identify potentially dangerous areas, it’s the law. Section 302.1 of the Americans with Disabilities Act (ADA) requires that floor and ground surfaces be “stable, firm, and slip resistant…” The International Building Code (IBC) and the National Fire Protection Association (NFPA) 101 Life Safety Code all mandate that walkways be slip resistant.

Surprisingly none of these regulatory groups define the term “slip resistant” by way of a test method. So, what exactly does it mean to be slip resistant?

In 2020, the NFSI B101.1 and B101.3 wet Coefficient of Friction (COF) test methods defined the term “slip resistant” to be a walkway surface which when tested per these standards is “Moderate to High-Traction.” Looking at the B101.3 wet Dynamic Coefficient of Friction (DCOF) standard, Moderate Traction walkways have a DCOF of 0.30 to 0.44, while High-Traction walkways have a wet DCOF level of 0.45 or greater. (See Table 1) 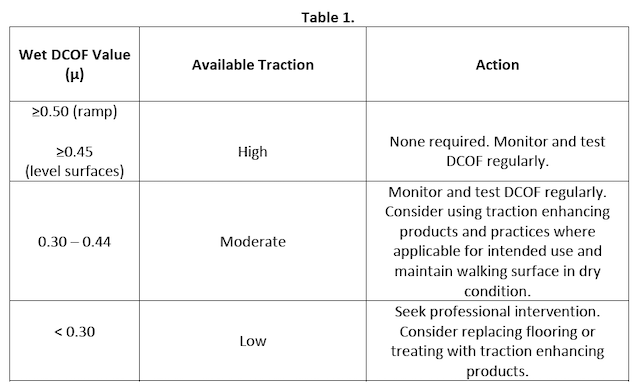 How to Measure Slip Resistance

The NFSI has approved four portable test devices that facilities executives can use to measure the slip resistance of floors. They’re called tribometers and can be used to take COF measurements. Unlike the past, where taking slip resistance measurements was a technical exercise and difficult to complete, today's tribometers are fully automated and are as simple to use as pressing a button.

One of the most popular tribometers is the TRACSCAN 2.0. The technology behind the equipment was originally developed back in the 1990’s by the NFSI, in partnership with a German engineering firm, and was called the Universal Walkway Test (UWT). Later re-named the BOT-3000, the TRACSCAN 2.0 is the fifth-generation technology and makes measuring slip resistance easy, reliable and accurate. Other NFSI-approved tribometers include the GS-1 and the American Slip Meter (ASM) 825 and 925.

If testing identifies that floor traction is low, don’t panic. Most slippery floor conditions are the result of polymerized films that have built up over time and create a slippery wax-like coating, which is invisible to the naked eye.

The first step facility cleaning teams should take is to remove the polymerized film by using an NFSI-certified product. Since 2002, the NFSI has been testing and certifying floor cleaning products and equipment, such as autoscrubbers, for their ability to make floors less slippery. Today, hundreds of NFSI-approved products are available and serve as the first step in increasing the slip resistance of a floor or surface.