Cleaning: Floor Care Equipment
Matting Is A Must
BY Becky Mollenkamp 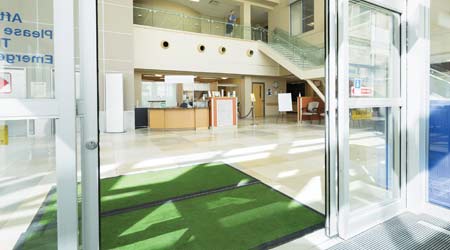 Dirt is a fact of life. It’s also an expensive problem for facility departments.

It costs more than $500 to remove just one pound of dirt after it’s tracked throughout a building. That may not sound like a lot of money, but consider this: 1,000 people coming through an entrance over a 20-day period can bring with them 24 pounds of dirt. That $12,000 in cleaning costs.

The good news? There’s a way to minimize dirt in a facility. Entrance matting acts as a first line of defense, preventing as much as 80 percent of dirt from accumulating. That means an investment of a few hundred dollars could reduce those cleaning costs to $2,400.

“The more soil you trap at the entrances, the cleaner your building will stay,” says Steve Spencer of Spencer Consulting, and former facilities specialist at State Farm Insurance. “Mats are a very positive addition to the building.”

About 80 percent of the soil in a building comes from outside, tracked in on people’s shoes. How much matting does it take to collect and stop all that dirt? Experts agree that facility cleaning managers should create a “walk-off area” that includes exterior and interior mats. Exactly how long this area should be is up for some debate.

On the high end, Spencer suggests 35 to 40 total feet of matting.

“That will collect over 90 percent of the soil that’s coming in from outside, whether wet or dry,” he says.

A slightly lower number comes from Bill Fellows, owner of Fellows Custodial Consulting and author of Creating Your Place In The Cleaning Industry.

“An exterior scraper or wiper mat should be followed by a minimum of 10 feet of a walk-off matting,” he says.

Offering a more general rule of thumb, Seal 360 Consultant Skip Seal, LEED AP, ICE-GB, says, “You want enough of each type of matting for a person’s foot to hit twice. That length changes from an elementary school to a basketball stadium.”

Seal recommends basing mat length on the tallest people in the building. They will have the largest feet and will track in the most dirt.

Whatever guidelines managers choose, the most important thing to remember is that carpet is not an acceptable substitute for matting.

“Don’t let your carpet become a walk-off mat,” Seal says. “You can’t lift it up, clean it and wash it out.”

As to what type of matting a facility to should install, the experts agree. Ideally, every building should have three types: A scraper (typically located outside, but it may need to go in the foyer in an urban area with sidewalks), a scraper/wiper (inside, often in a vestibule) and finally a wiper mat (inside).

Matting can also be useful at transition points, such as entrances into gymnasiums, as well as in food service areas or other spots prone to moisture. The mats will protect the floors from tracked dirt, but they will also prevent slip, trips and falls.

next page of this article:
Choose Mats That Prevent Slips And Falls