Cleaning: Restroom Care
What Does A Clean Restroom Really Smell Like?
BY Nicole Bowman 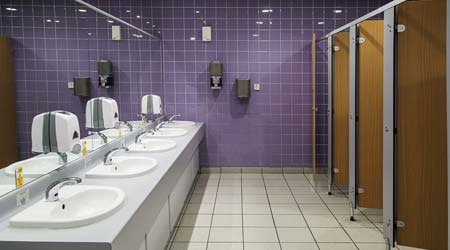 Good or bad, the perception of a restroom is often dictated by the way it smells. Normally, the odors are foul, caused by standing water, urine, soiled papers or various bacteria. Other times, a fragrance designed to help control odors ends up being the cause of complaints. Either way, it’s in managers best interest to control smells stemming from restrooms.

According to a 2017 Contracting Profits survey, malodors are the second most common restroom complaint in any facility. For most building occupants, a malodor will indicate immediately that a restroom is not clean. Alternately, the vast majority of individuals also associate pleasant scents with cleanliness.

But before managers up that order for air freshener, they should take note: Fragrances may mask malodors, but they are not always the best choice for getting rid of them, and they can be harmful to human health.

The U.S. Environmental Protection Agency (EPA) actually classifies air fresheners commonly used in restrooms as a source of indoor air pollution. The agency also cites a host of building-related diseases that have been directly traced to indoor air pollution, including Legionnaires’ disease, asthma, hypersensitivity pneumonitis and humidifier fever, in addition to a slew of symptoms like dry or burning mucous membranes in the nose, eyes and throat, sneezing, stuffy or runny nose, fatigue or lethargy, headache, dizziness, nausea, irritability and forgetfulness.

A study conducted by a team of researchers at the University of Washington, Seattle, found that over one-third of Americans report health problems such as those outlined by the EPA. Respondents listed everything from asthma attacks to migraine headaches as side effects of being exposed to commonly fragranced consumer products such as air fresheners and cleaning supplies.

Anne Steinemann, professor of civil engineering, chair of sustainable cities at The University of Melbourne in Australia, led the research on that study and has authored many others that look at the negative health impact of fragrances commonly used in restrooms.

“This is a huge problem; it’s an epidemic,” she says.

“Basically, if it contained a fragrance, it posed health problems for people,” she says.

Steinemann recommends that facility cleaning managers choose restroom products that do not contain any fragrance (including masking fragrance, which unscented products may contain), improve ventilation rather than using air fresheners (which are not designed to clean or purify the air, but only mask the problem and impose health and economic risks), and implement fragrance-free policies.

“It’s a relatively simple and cost-effective way to reduce risks and improve air quality and health,” she says.

next page of this article:
Identify The Source Of Restroom Odors