Hotel Cuts Vacuuming Time In Half With Cordless Upright 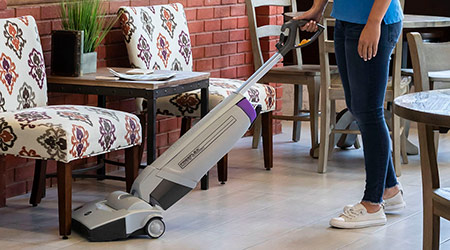 "If you had a lawnmower with a power cord, it would be inconvenient to move the cord all around your yard." As the general manager of Comfort Suites University in Lincoln, Nebraska, Eric Gambill thinks in practical terms. His hotel runs at full capacity most of the time. With 59 guest suites to keep clean, his housekeepers need equipment that is easy-to-use, effective and productive. That is why Gambill decided to test the ProTeam FreeFlex cordless hybrid upright vacuum.

"Vacuuming is a lot faster using the cordless upright, because you don't have to keep moving the power cord from outlet to outlet," says Gambill. "Instead of lugging something heavy and plugging it in, you just grab the FreeFlex and let it work for you."

Each suite in the hotel is 18-feet wide and 24-feet across, and contains one or two king beds and a sofa bed. Housekeepers were timed vacuuming 20 rooms with their regular corded uprights and then with the FreeFlex cordless upright. The FreeFlex cleaned a room twice as fast, reducing vacuuming time per room from 2 minutes to 1 minute. When added up, the FreeFlex covered an 80-minute vacuuming shift in just 40 minutes.

If Gambill were to implement the FreeFlex in all 59 guest rooms, he would save 369 hours of labor every year. With a $9.50 average hourly wage, that adds up to $3,409 saved annually just by switching to the FreeFlex cordless upright vacuums. At this savings, Gambill could outfit his entire staff with FreeFlex units and they will pay for themselves in the first year, providing a return every year after that.

Instead of replacing his fleet all at once, Gambill plans to purchase new FreeFlex cordless uprights as his current fleet of corded vacuums breaks down. He also plans to invest the resulting time savings back into his workers.

"When we save time on vacuuming, I will send the workers home earlier and let them spend more time with their families," says Gambill.

The housekeeping staff uses the FreeFlex for more areas than just guest rooms. Every day, they spot-vacuum common areas, like hallways. The vacuum weighs only 17.6 pounds, including the battery, so it is easy to grab for quick touchups.

"The FreeFlex is lighter than a corded upright, which makes a big difference. It is easier to use and creates less muscle fatigue," says Gambill. "Also, the housekeepers don't have to bend over to plug in. When you plug and unplug over and over throughout the day, you feel it."

The FreeFlex cordless upright also allows for cleaning around guests without worrying about them tripping on the cord.

"Trips and falls are always a concern when vacuuming hallways," says Gambill. "Not having that trip-and-fall hazard in the hallways is a big deal."

For Gambill, putting the right tools in his housekeepers' hands is paramount to running a clean and welcoming hotel.

"One of the great things about our team is they communicate really clearly with me. I have veterans who have been here for six or seven years; they know what they need to do their jobs. The FreeFlex allows them to be more efficient and get the job done," says Gambill. "Introducing the FreeFlex upright has been a positive experience for everyone."