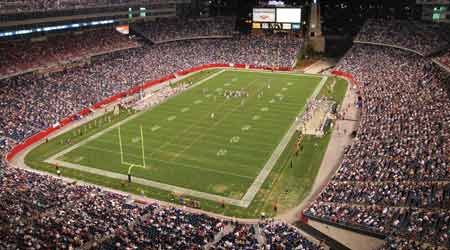 After their team brought home their sixth Super Bowl win earlier this year, New England Patriot fans certainly had a lot to cheer about. The win had tied them with the Pittsburgh Steelers for the most Super Bowl titles in NFL history, and the future is looking bright.

While owner Robert Kraft is sustaining and building a strong team on the field, the facilities team operating behind the scenes at Gillette Stadium is working diligently to enhance the fan experience. With an average attendance of almost 66,000 fans every game, this is no small feat.

“The maintaining of the stadium is made possible by good planning, great staff and a desire to provide the best environment for our employees and customers,” says Jason Stone, vice president of site operations at Gillette Stadium.

The environment Stone refers to reaches into every nook and cranny, including one of the most frequented areas: the restroom.

At a stadium where fans spend hours before games tailgating and thousands of dollars on food and drink inside, it’s no surprise that facility restrooms quickly become high-traffic destinations. Despite the 52 restrooms available throughout the stadium, it’s inevitable that lines will form and cleaning staff will be challenged with maintaining stock and cleanliness.

“The restrooms originally featured paper towel dispensers, but those were converted to hand dryers a few years [after the stadium was built],” says Stone. “We chose dryers to cut down on service issues and to reduce our materials spending.”

Now the staff can focus their attention on the overall cleanliness of the restrooms without having to worry about restocking paper. That shift reportedly saved the facility 95 percent versus paper towel costs, maintenance and waste.

“Not having to pick up excess paper towels, restock towel dispensers, or pay for the removal of such waste, the stadium saved thousands of dollars in operating expenses,” says Jim Nolan, COO of the New England Patriots and Gillette Stadium.

In addition to the money saved on materials and labor, the dryers fit into the stadium’s green initiatives (see sidebar) by reducing paper waste. When the stadium was erected in 2002, it was done so with sustainability in mind. The hand dryers help reduce waste while also contributing to the energy efficiency initiatives currently in place.

According to Excel Dryer, the XLERATOR uses 80 percent less energy than conventional hand dryers, which reduced the carbon footprint at Gillette Stadium by 70 percent.

Although Patriot fans might not notice a difference in the carbon footprint, they will see shorter restroom lines interfering with their game-day experience. Providing high-speed hand drying options means guests can efficiently move in and out of restrooms quickly. Dryers never run out of stock and the 10-second dry time means little backup before fans are back in their seats.

Facilities professionals went one step further in enhancing the fan experience by customizing dryers and providing specialty fixtures in premier locations throughout the stadium. For example, in all the general admission restrooms, hand dryers are fitted with Patriots branded imagery. Kolorfusion digital image technology was used to customize the dryers with the team’s logo. This was a subtle upgrade, but one that creates uniformity and fan support.

In exclusive areas of the stadium, the D/13 Sink System from Excel Dryer is being used. Currently, the sink/soap/dryer combination system is featured in both the Cross Insurance Pavilion and Business Center located in the North End Zone, and the Optum Field Lounge located in the South End Zone.

These all-in-one counter fixtures provide design customization and a high-end experience in specialty areas of the stadium, says Stone.

Incorporating hand dryers throughout the stadium was a win for everyone. In fact, according to Nolan, it was a “win-win-win-win.”

“First, it’s clearly better for the environment,” says Nolan. “Second, it saves time and manpower as our staff spends much less time cleaning paper from the floor and refilling paper towel dispensers. Third, that allows staff to respond more quickly to other fan issues. Fourth, and most importantly, the fans prefer the dryers to paper, so they have a better experience.”

next page of this article:
Gillette Stadium Sustainability Efforts