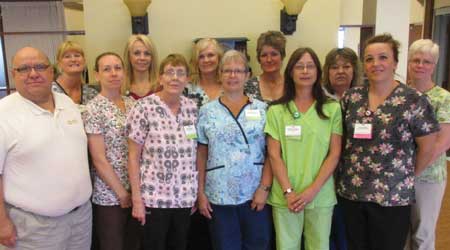 As executive housekeeper at Merrill, Wisconsin-based Pine Crest Nursing Home, Bruce Slaminski is on the front lines of preventing the spread of infection. He knows firsthand the challenges associated with this task; difficulties, he says, that have increased as the type of care nursing homes provide has expanded.

“We are finding a lot of people are coming in with C.diff (Clostridium difficile),” he says. “What contributes to that is the use of antibiotics.”

C.diff is one concern, but infections related to antibiotic-resistant organisms, norovirus, and respiratory infections are a few others. Any of these illnesses can and do kill already sick and frail elderly residents.

Every year an estimated 388,000 deaths due to hospital-acquired infections (HAIs) occur in U.S. nursing homes. The fact that nursing homes have evolved into post-acute skilled nursing facilities has increased the potential for the spread of HAIs. Then there is also cold and flu season, which rampantly spreads viruses and respiratory illnesses amongst the immunocompromised residents.

Slaminski, who has headed housekeeping at Pine Crest for 18 years, understands that a good cleaning operation can make all the difference in keeping HAIs at bay. For this reason, he set out to make some changes in the 125,000-square-foot, Lincoln County-owned facility before construction began on a 50,000-square-foot addition.

“Environmental services is an essential component in any infection prevention and control program,” Slaminski says. “If you have a really good program in place, and take a team approach, you can really control infections in your facility.”

Pine Crest, the only nursing home in the city of Merrill, has 180 beds with a 90 percent occupancy rate. This requires Slaminski to keep close tabs on processes through a regular cleaning schedule. Five days a week, a 13-person housekeeping staff thoroughly cleans all areas of the nursing home, which includes resident rooms, conference rooms, offices, classrooms, break rooms, therapy areas, and the dining hall and kitchen. On the weekends, a skeleton crew cleans ancillary areas, and nursing assistants pitch in to help with the rest.

“In a nursing home, the residents are compromised to begin with so it’s really important that we have an excellent infection control and cleaning program in our facility,” says Slaminski. “We follow a rigid daily cleaning schedule, especially in the resident rooms.”

This schedule includes wiping down all high-touch surfaces, such as bed rails, doorknobs, faucets, etc., with a disinfectant recognized by the U.S. Environmental Protection Agency. In fact, Slaminski says the facility just switched to a new disinfectant because they sought a better product to fight C.diff. He explains the spread of C.diff is one of the toughest infections to control in a facility, and notes that most chemicals approved by the Centers for Disease Control and Prevention (CDC) are bleach-based, which kills the bacteria, but also can damage surfaces if used incorrectly.

“We were looking for a different product because C.diff was becoming a recurrent problem,” he says.

Slaminski selected OxyCide from St. Paul, Minnesota-based EcoLab. This one-step, hospital-use disinfectant is designed for general cleaning, disinfecting and deodorizing of hard, nonporous surfaces and is effective against C.diff in three minutes.

Before adding the disinfectant, the facility conducted an extensive, four-month trial. Slaminski says this helped him gauge the product’s results and its potential impact on residents.

“Today, we use it on all surfaces in resident rooms except the floor — sinks, toilets, walls,” he says.

next page of this article:
Technology That Prevents Hospital Acquired Infections